Saudi Arabia startups raised US$205 million across 34 deals in Q3, their best ever quarter in terms of funding, according to a new report.

VC funding for Saudi Arabia startups grew over 4x in the quarter, compared to the same period last year. This is according to the Q3 KSA Venture Investment Report by Magnet and the Saudi Venture Capital Company.

Total VC funding in Saudi Arabia reached US$376 million year-to-date so far, more than twice the annual amount raised in 2020.

The number of deals also surged by 5x during Q3 this year versus the same quarter last year, with a total of 34 transactions.

This also represents about a third of the 91 deals secured by Saudi Arabia startups year-to-date in 2021. Over, deals grew by three-fold this year so far, compared to the last. 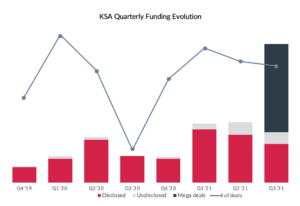 Fintech outshone other sectors in terms of number of transactions this year, according to the report. The most number of funding deals this year were closed by fintech startups in Saudi Arabia.

Conversely, the ecommerce industry saw a decline in number of deals by 15%, and funding by 27%. However, it still attracted the second-highest funding in the year so far in 2021.

While early stage funding rounds fell in Q3, deals sized between US$500,000 and US$3 million dominated VC cheques. These deals made up 53% of all VC investments in Saudi Arabia startups for the year-to-date. Deals under US$500,000, on the other hand, contributed 26% of total deals, compared to 66% last year.

Elsewhere, Saudi Arabia startups have largely raised funding from regional investors this year. Of the 53 investors that participated in venture deals in the country, just nine were based out of the MENA region. These foreign investors represented 17% of active investors in the year so far, compared to 46% in the UAE and 44% in Egypt.

Further, about 60% of active investors in Saudi Arabia this year were based within the country.

It was reported earlier this year that VC funding in Saudi Arabia increased by 64% year on year during H1 this year, with fintech claiming one in every four deals that took place in this period.