An investment group that includes Japan’s SoftBank and Saudi Arabia’s main sovereign wealth fund, has announced a major close with over US$93 billion of committed capital for the tech-focused SoftBank Vision Fund. 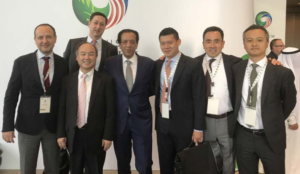 The fund, which is targeting a total of US$100 billion of committed capital with a final close within six months, is expected to be the largest technology investment fund ever. It aims to invest in companies and “foundational platform businesses” that seek to enable “the next age of innovation.”

“Technology has the potential to address the biggest challenges and risks facing humanity today,”

“The businesses working to solve these problems will require patient long-term capital and visionary strategic investment partners with the resources to nurture their success. The SoftBank Vision Fund is consistent with [the bank’s strategy as to invest in transformative technologies and support disruptive entrepreneurs]. It will help grow businesses creating the foundational platforms of the next stage of the Information Revolution.”

Alongside SoftBank and the Public Investment Fund of the Kingdom of Saudi Arabia, other investors include the Mubadala Investment Company of the United Arab Emirates, which has committed US$15 billion, Apple Inc., Foxconn Technology Group, Qualcomm Incorporated and Sharp Corporation.

Saudi Arabia’s Public Investment Fund began signaling an interest in the tech sector last year when it invested US$3.5 billion in Uber. Last month, the fund injected US$500 million into noon.com, a startup based in Riyadh that wants to be the Amazon of the Middle East.

Commenting on the launch, Yasir Al Rumayyan, managing director of the Public Investment Fund of the Kingdom of Saudi Arabia, said that the investment in the SoftBank Vision Fund was “an important part of our overall investment strategy.”

“We are building a portfolio that is diversified across sectors, asset classes and geographies, and expect the Vision Fund to act as a platform to access of exciting, emerging opportunities in the technology sector,”

“We expect that this will, in turn help enable the Public Investment Fund’s role in supporting the Kingdom of Saudi Arabia’s Vision 2030 strategy to develop a diversified, knowledge-based economy.”

Saudi Arabia’s Vision 2030 is a plan to reduce the country’s dependence on oil and rely on alternatives diverse economy and the development of service sectors such as health, education, infrastructure constructive, recreation and tourism.

Details were announced in April 2016 by Deputy Crown Prince Mohammad bin Salman Al Saud and include 80 projects costing as least US$3.7 million and also up to US$20 million implement the Saudi Vision 2030.

According to experts gathering for the Euromoney Saudi Arabia Conference earlier this month, Saudi Arabia’s financial sector is likely to encounter significant disruption from new fintechs in the coming years, but could emerge stronger and more streamlined.

Fintech development in Saudi Arabia has been slow so far but new initiatives are being set up to create a positive ecosystem for fintech. These will be designed to enhance the business environment, reform regulatory support and provide access to capital, according to reports.

This article first appeared on fintechnews.ch, Featured image by zimmytws via Shutterstock.com.