Historically, the United Arab Emirates has seen significantly less financial innovation than the west. In part because most of the leading companies worldwide are based in the US and London, two countries that have a closer relationship with each other than with the UAE, have been causing the UAE to fall behind.

However, as the size of UAE’s internationally-focused economy grows, new efforts have been placed on financial innovation. Through capitalizing on the increasing role ESG is taking in investment, along with open banking and virtual assets, the UAE is accelerating innovation and attracting financial leaders. Abu Dhabi Global Market (ADGM) is symbolic of how the financial industry is changing, as the company grows to having over $33 billion in assets under management.

Because the UAE was in a developmental stage, it had the luxury of choosing the direction of the finance industry before it matured. And, with global attention slowly turning towards ethics and the environment, Abu Dhabi is becoming a sustainable finance space, as explained here by ADGM themselves.

However, when it comes to the transfer of money from UAE internationally, efficient solutions are still touch-and-go.

In 2021, approximately 89% of the UAE population consisted of expats. When putting this together with a growing fintech space within its own borders, suddenly money transfer services for UAE residents and expats becomes a central part of life.

By nature, cross-border payment platforms are global, meaning some western firms inevitably offer their services to UAE residents. But, this isn’t always the case, as some firms want to traverse as few licensing bodies as possible. Transferring money internationally from UAE, therefore, has fewer options than most western countries.

MoneyCorp is one British company that decided to put an office in Dubai so that it could license itself there in a straightforward way – as well as Hong Kong, Brazil, the US, and most of Europe. This means that the service UAE residents get is the same as British residents – something that is difficult to achieve without a physical presence in that country.

This appears to be a growing trend in UAE, attracting more and more businesses to base there. However, Currencies Direct manages to provide low-cost transfers of money from UAE internationally without having a physical presence there, showing it is possible. Though, few countries are quite as globalized as Currencies Direct, with its 22 offices around the world and 5-fold regulation by the FCA, FinCen, SARB, FINTRAC, and Bank of Spain.

The Dirham is considered to be in-between an exotic currency and a major currency route for the pound, euro, and US dollar. This means volume is slightly lower, which can cause higher margins when exchanging money.

The issue is becoming increasingly talked about in UAE’s economy and is what’s drawing companies to meet this demand – in part too because of high street banks’ failing over delivering good exchange rates. Ranging from AED 0 – 100, and a typical exchanging margin of 2-5%, frequent dealings with overseas payments can accumulate to unviable amounts of fees.

Wise (formerly Transferwise) is a global phenomenon that soon became a unicorn company. Founded in 2010, the London-based company highlighted just how expensive it was to send money overseas with a British high street bank. The SWIFT system mixed with the legacy systems and lack of FX specialization for ordinary customers meant that currency was expensive. In a world that was becoming more dependent on cross-border transfers, it was the right storm at the right time for Wise.

But, it wasn’t just a problem with British banks, it was a shared issue around the world – including the UAE. However, Wise went a step further by offering not just to help send money for cheap across borders, but multi-currency accounts, meaning customers can hold and internally exchange money themselves in a USD, EUR, and AED virtual bank account – ideal for the average UAE expats or small international business.

For a long time, Wise was offering AED and was the biggest alternative money transfer company in the world. However, the good times didn’t last long for Emiratis and expats, as Wise announced having to stop offering AED virtual accounts.

The regulation change meant that multi-currency accounts for those with a UAE address had to be stopped, though AED was still available to the rest of the world. 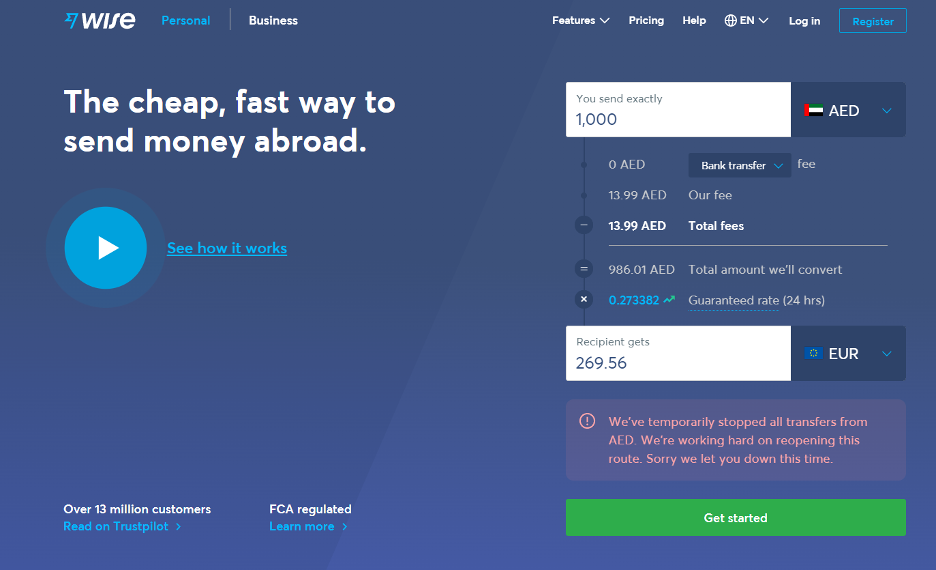 Whilst Wise AED remains to offer a viable way of cheap transfers to the AED, Currencies Direct and Moneycorp continue to offer money transfer services for UAE residents. For now, these remain more efficient than domestic alternatives and hegemonic banking systems. However, the UAE Central Bank is set to introduce a digital currency in 2023 that seeks to increase the efficiency of the monetary system.

We are yet to see the outcome of the currency pilot, but it’s clear that overseas money transfer companies cautious navigating through UAE regulation isn’t the final solution. Whether it is blockchain technology, centralized digital currency, or domestically-backed money transfer alternatives, the future of payments and currency in the UAE is yet to be seen.