Iran’s Central Bank: Cryptocurrency Ban May Be Lifted In September

A national draft project is aiming at introducing a state-backed digital currency. Iran’s Central Bank deputy for innovative technologies, Nasser Hakimi, advances the regulatory apparatus should be finalized within one month.

A previous post already commented on the severe and “unprecedented” U.S. sanctions Iran is currently facing. As a matter of fact, several French and European companies began to disinvest and cease their operations. Among others, let’s mention the heavyweights such as Total, PSA and the European aerospace corporation, Airbus which was about to enter into a new deal with IranAir.

Before summer, the famous Nakamoto coin and all its derivatives experienced ups and downs in the Persian Gulf and more especially in the country headed by Hassan Rouhani. We obviously remember the volatility of the local currency – the Iranian rial – which suffered a sharp depreciation against the dollar during the last twelve months, which in turn, arise the decentralized currencies’ popularity. A few months before, however, the local central bank banned the purchase and sale of cryptocurrencies, one of the major reason being AML concerns.

Since then, a new perspective has seemed to appear. Indeed, Hakimi mentioned in a recent interview with EghtesadOnline the following: 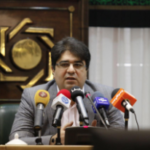 “The first concerns the prevalent global cryptocurrencies. The High Council of Anti-Money Laundering has imposed a ban in light of concerns over global allegations of money laundering and financing of terrorism. But it seems that after the government’s consideration, this blanket ban will be reviewed,”

Along those lines, the ban previously established against cryptocurrency in April may vanish. The Iranian economic media Financial Tribune highlights that a new document on the national cryptocurrency has been prepared under the guidance of President Hassan Rouhani.

Nasser Hakimi being in charge of the project in partnership with the National Cyberspace Center declared that there is a strong possibility for Iran to develop a state-issued cryptocurrency.

Referring to this plan, he noted that

“National virtual currencies haven’t proved successful experiences in the world, but some economic officials have emphasized on this, so the Informatics Services Corporation has readied a test edition and some other entities are also cooperating in this.”

By ‘national virtual currencies’, the deputy obviously makes a comparison with several other countries having developed or developing they own national digital currency (Petro in Venezuela, Stasis in Europe, ChinaCoin in China and so forth…).

The Central Bank deputy stated that, as of now, attention will now be focused on the regulation of public cryptos assets.

The country’s decision to develop its own national digital currency was first revealed in July and comes in response to recent economic sanctions led by the United States. The aim of this new cryptocurrency is simple. It must serve as a means to “facilitate the transfer of money” to “anywhere in the world.”

A question may remain, though: if this new digital national cryptocurrency shall be released by the Central Bank itself, will this new crypto remain entirely decentralized?

Iran: Cryptocurrencies Could Be A Way To Circumvent U.S. Sanctions

Fintech in Iran: An Overview