In the United Arab Emirates (UAE), rapid digital adoption brought about the COVID-19 pandemic has accelerated the continued interest in digital banking solutions, prompting mass adoption of neobanking services as a way to access funds, make transactions and manage personal finances and conveniently while remote.

Finder, which conducted a global survey of 1,015 respondents in April 2022, found that UAE consumers to be among the most eager to embrace digital banking. Of the UAE consumers surveyed, 19% indicated having a digital bank account and an additional 15% sharing intent to open one in the next year. This takes adoption to a forecasted 34% in 2023.

The figure puts the UAE at the sixth position in terms of digital banking penetration, ahead of Mexico, Germany, the Philippines and the US. 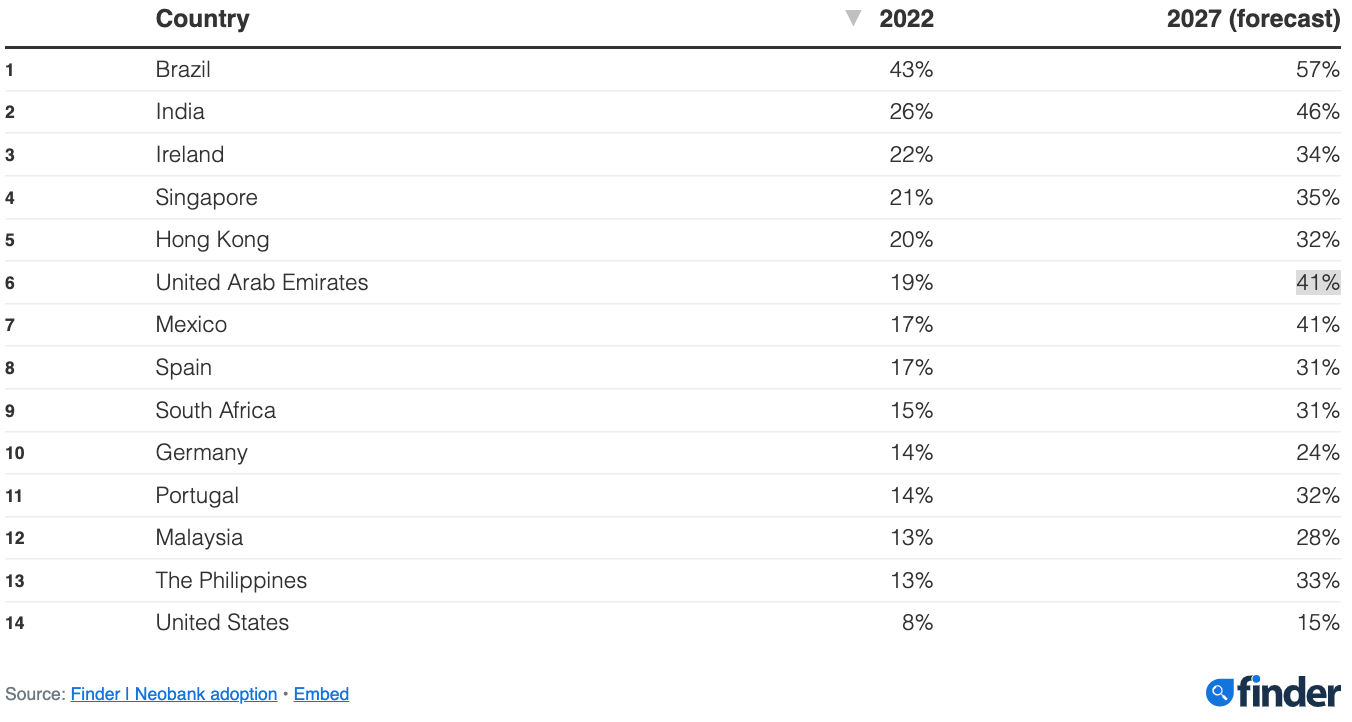 Image: The percentage of adults with a digital only bank account in 2022 and the percentage that will have one by 2027, Source: Finder, 2022

Comparing this year’s figures with last year’s, Finder found that the UAE saw a 2 percentage point increase in the number of people with a digital-only bank account, a rise which it says could be due to COVID-19.

Results of the Finder survey are consistent with those of other research on digital financial services adoption. Mastercard’s New Payments Index 2022 has found that 29% of consumers in the UAE have used less cash in the past year. By contrast, 66% of UAE users have increased their use of at least one digital payment method, including digital cards, SMS payments, digital money transfer apps and instant payment services.

88% of UAE respondents said they have used at least one emerging payment method in the last year. Of these, 39% used a tappable smartphone mobile wallet, 29% used BNPL, 20% used cryptocurrencies and 18% used a payment-enabled wearable tech device.

Despite rising adoption of digital financial services, regulations on the national level to encourage usage and facilitate growth have largely lagged behind jurisdictions like Hong Kong, the UK and Singapore. This the case for remote onboarding, for example, where bank account opening in the UAE still almost always require in-person visit, a requirement that’s set by the country’s central bank.

India, for instance, announced in 2020 that it would allow video-based know-your-customer (KYC) as an option to verify a customer’s identity. In Malaysia, Bank Negara Malaysia issued in 2019 draft requirements for financial institutions looking to implement electronic KYC (eKYC), including the use of biometric technology, fraud detection and liveness detection.

The UAE is home to a handful of digital banks, with most of them being run by incumbent banks. This is the case for Mashreq Neo by Mashreqbank, Liv by Emirates NBD, and Amwali by Abu Dhabi Islamic Bank (ADIB).

Yap is reportedly the first independent digital banking platform to ever be introduced in the UAE. The company, which was launched just last year, is a digital banking application with banking services provided by Rakbank.

Zand is another new challenger bank that announced in July that it had obtained regulatory approval. The company offers corporates a range of services, including easy onboarding, fast account opening, and automated loan approval. Zand aims to launch personal banking solutions later this year.