The blockchain remittance service is provided by Telenor’s Easypaisa and Valyou, a financial technology
company that provides remittances to underbanked communities.

The plan was unveiled at an event in Islamabad attended by State Bank of Pakistan Governor Tariq Bajwa, marking a major milestone in the country’s journey to promote financial inclusion.

The blockchain technology will significantly boost the speed and efficiency of remittances from Malaysia
to Pakistan. It will also ensure the money transfers are highly secure and transparent, as all information
stored, shared, or uploaded through the blockchain remittance platform will be encrypted with advanced protocols in order to protect users’ privacy. 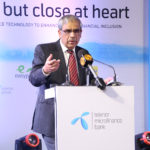 “At around USD 20 billion per year, international remittances are important from the perspective of overall macroeconomic stability and their positive spillover in improving lives of millions of families. Home remittances contributed to over 6% in GDP, equivalent to over 50% of our trade deficit, 85% of exports and over one-third of imports during FY 2017-18.”

“This puts Pakistan on the map of very few countries in the world that have launched International Remittance using blockchain technology”, he added.

The blockchain-powered remittance service will make round-the-clock, real-time money transfers
between the two countries possible at a competitive exchange rate, with Alipay’s transaction fees
waived during the one-year trial period. 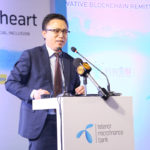 “The new remittance service is one of the examples of how emerging technologies can help countries meet their digital and financial inclusion goals. We’re thrilled to be part of Pakistan’s financial inclusion efforts and we’re dedicated to exploring breakthroughs and applying them to benefit more people in more places,”

By eliminating intermediary costs, the new remittance service reduces transactional cost for end-users, while the blockchain technology enables both senders and receivers to track their money every step of the way, significantly boosting the service’s efficiency and safety.

Pakistan is in the process of strengthening its financial system, with the Pakistani government recently enhancing its National Financial Inclusion Strategy through a five-year plan that aims to create three million jobs and additional exports of USD $5.5 billion by improving SMEs’ access to financing.

Starting from 2015, Alipay has formed nine strategic partnerships with local partners outside Mainland China. As of today, Alipay, together with its global partners, are serving over 1 billion active users globally.