In 2019, Saudi Arabian startups raised a record of US$67 million through 71 deals, representing a 35% increase in investment amount and a 92% increase in deal count, according to the 2019 Saudi Arabia Venture Capital Snapshot report by startup data platform Magnitt.

The figures brought Saudi Arabia to the rank of third in the Middle East and North Africa (MENA) region in terms of deal count and total funding. In 2019, the country accounted for 9% of total funding and 12% of all deals in MENA, following the United Arab Emirates (UAE) and Egypt. According to the report, Saudi Arabia recorded the fastest year-on-year growth in venture funding deals. 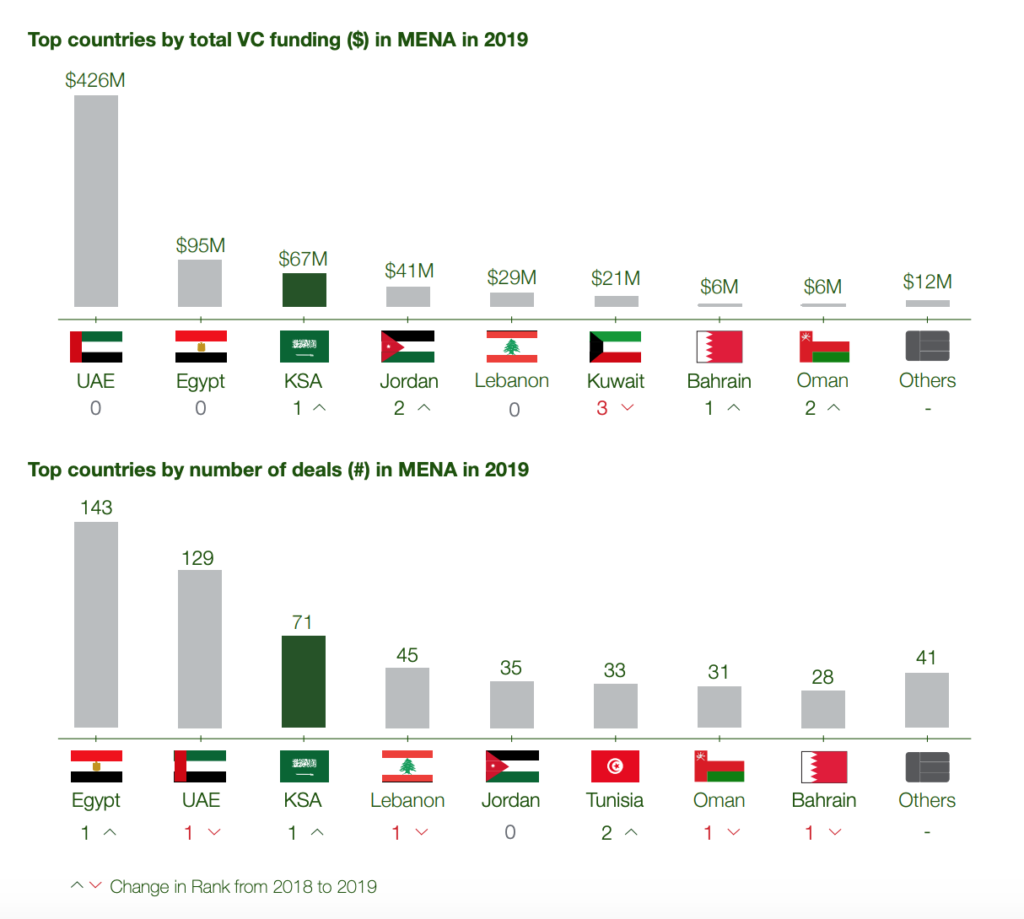 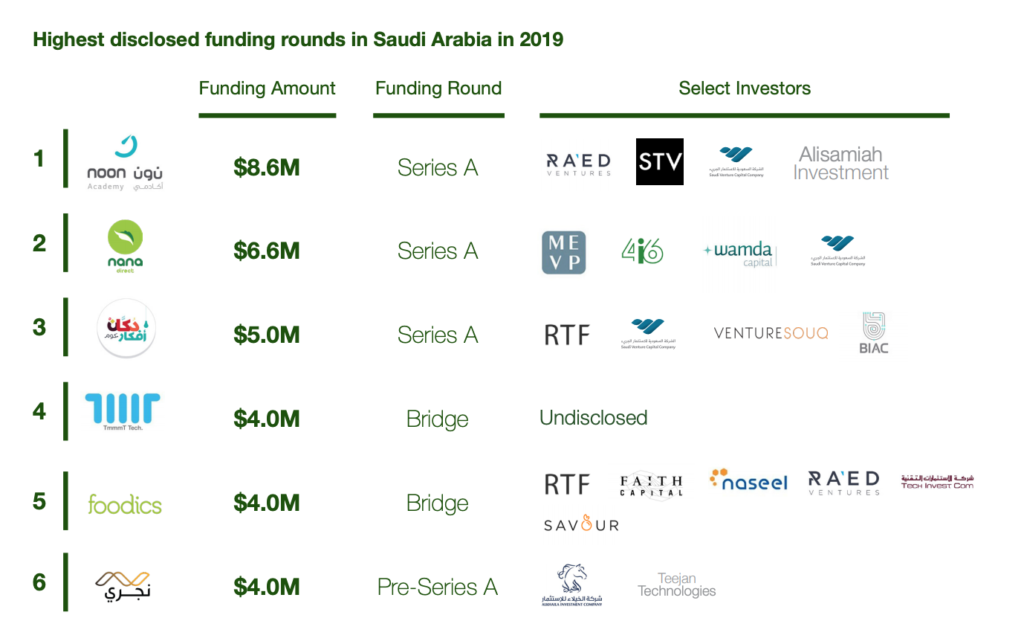 In 2019, e-commerce and delivery and transport remained the top two industries in Saudi Arabia. E-commerce startups took 27% of all deals last year, and 25% of the total investment amount.

Delivery and transport startups received the highest amount of funding (26%), up 21% compared with the previous year. The sector ranked second in number of deals in 2019 (9%).

2019 also saw the rise of several segments, including edtech and IT solutions, which took the third and fourth spots respectively by investment amount in 2019. In terms of deal count, data analytics and business intelligence, as well as human resources and recruitment gained momentum, both accounting for 7% of Saudi Arabia’s total number of deals in 2019.

2019 saw the largest number of investors participating in the Saudi Arabian startup ecosystem with 41 institutions investing in domestic startups, an increase of 58% compared with the previous year, the report says.

68% of these investors are based in Saudi Arabia, while 32% are based outside of the Kingdom and mainly in the UAE. This showcases rising interest coming from international investors, the report says.

Though Saudi Arabian investors significantly supported the domestic startup ecosystem in 2019, these also actively invested into other MENA startups and were in fact the most active investors across the region last year.

In total, 48 investors from Saudi Arabia made investments in MENA-based startups in 2019, ranking first in the region, followed by the UAE and Egypt, according to the report.

In 2019, accelerators accounted for 32% of all investments in Saudi Arabia. Among the most active investors were the new Misk 500 Accelerator, the first early stage startup accelerator in Riyadh launched last year by 500 Startups and Misk Innovation, and Misk Growth Accelerator, a three-month, post-acceleration program by Misk Innovation, Seedstars and Vision Ventures.

The most active corporate venture capital firm by number of deals last year, according to the report, was Wa’ed Ventures, the corporate venture capital arm of Saudi Aramco. OQAL, the Saudi angel group, was the most active angel group by number of deals with 18 investments in Saudi Arabia in 2019. 500 Startups was also one of the top investors in Saudi Arabia’s startup ecosystem last year. 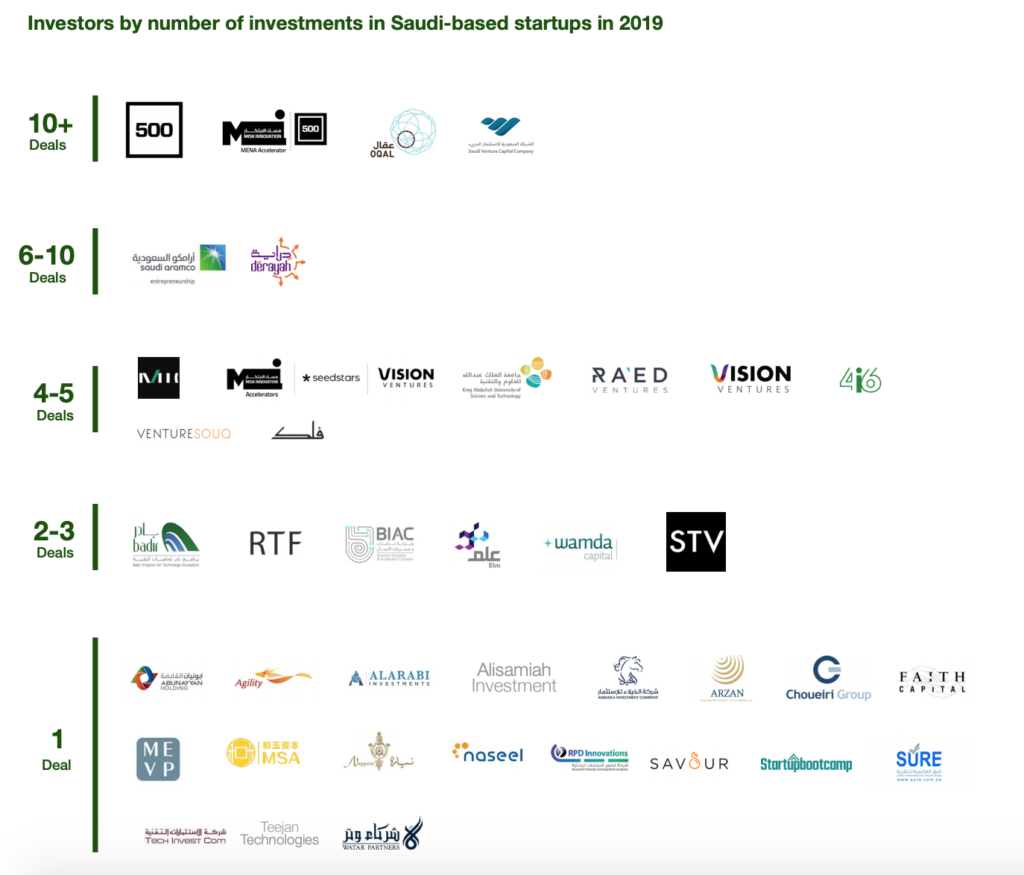 2019 saw several fintech initiatives being launched in Saudi Arabia, including the launch of a fintech sandbox by the Saudi Arabian Monetary Authority (SAMA), as well as the granting of the first Financial Technology Experimental Permits (ExPermits) by the Capital Markets Authority (CMA).

Last year, Riyah Bank launched a new fintech startup investment program by called Digital Partnership Program. The bank committed SAR 100 million (US$26.7 million) to the initiative, through which it aims to accelerate the launch of new financial products across the country.

And in early 2019, SAMA and the United Arab Emirates Central Bank (UAECB) unveiled that the digital currency they had been co-developing would be called Aber. Aber is a proof-of-concept project aiming to experiment with distributed ledger technology (DLT) for domestic and cross-border payments using a common digital currency issued by both regulators.

This year, Saudi Arabia is expected to welcome its first crowdlending platform. Called Forus, the platform will be Shariah-compliant and will bring together investors and small and medium-sized enterprises (SMEs) looking for financing.