Amazon is aggressively expanding its e-commerce business in the Middle East, multiplying product launches with the introduction of home services in the United Arab Emirates (UAE) in July 2020, payment processing services in the broader Middle East and North Africa (MENA) region in December 2020, and the launch of Amazon Prime in Saudi Arabia in January 2021.

The American tech giant has been focusing on entering emerging markets to fuel its growth, eyeing these markets’ rapid mobile Internet adoption, lack of legacy infrastructure and growing number of the population entering the middle class.

In MENA, Amazon’s acquisition of Dubai-based online retailer Souq.com in 2017 marked its entry into the region and triggered a massive expansion push into the Middle East.

Amazon’s moves in the Middle East

Since its acquisition of the largest commerce platform in the Arab, Amazon has been working on building up its regional offering and boosting its visibility, a strategy that resulted in numerous rebranding moves.

Souq.com UAE became Amazon.ae in May 2019 and Souq.com KSA became Amazon.sa in June 2020. Similarly, Souq.com’s payment platform Payfort was rebranded to Amazon Payment Services and made its debut on the Amazon ecosystem two months ago. Services provided include additional instalment plans, protection against fraud, and payment performance analytics.

Helpbit, a repair and service marketplace and another subsidiary of Souq.com, was also rebranded to Amazon Home Services. The service was launched in the UAE in July 2020. It allows customers to buy and schedule different professional services including house cleaning, electronics repair, car wash, pet grooming and smart home services through Amazon.ae. Services providers selling through the Amazon program must follow the pre-defined scope and price set by the platform and pay a revenue share of 16% for completed jobs.

Amazon Home Services are currently just available in the UAE and it is still unclear whether the firm plans to take this to other markets in the Middle East.

In some markets, transformation is unfolding at a rapid pace. An EY study found that 92% of consumers in the UAE and Saudi Arabia had changed their shopping habits in 2020, while a separate survey across six countries including Jordan, Lebanon and Egypt suggests that between one-third and half of people are shopping online more frequently since the pandemic.

In the UAE, Amazon is the top e-commerce platform with 46% of shoppers using the service. Noon is the distant second at 16.9%, according to Arab News.

In the Middle East, the way people transact is also changing. Since the outbreak, the use of digital payments has been on the rise, with almost half of the region’s consumers now preferring mobile online payments to using in-person cards or cash, a Standard Chartered survey found. In the UAE, almost two-thirds (64%) of respondents expect the country to go cashless, with more than half expecting it to happen by 2030.

In financial services, Amazon’s strategy has mainly focused on increasing participation in its ecosystem through three key pillars: payments, cash deposits and lending.

This strategy has translated into the launch of solutions including digital wallet Amazon Pay, the Amazon Cash program which gives access to cash on delivery payment options, Amazon Lending for small businesses, and the Amazon Prime cards for consumer lending.

So far, most of Amazon’s fintech efforts have been mainly focused on the Indian market. The tech giant launched its Amazon Pay digital wallet in 2016, and has since introduced a credit card, signed up to a state-backed payments network, and now processes payments for movies and flight tickets as well as telephone and utility bills.

Most recently, it added insurance and gold investment products to its menu of financial services in India. 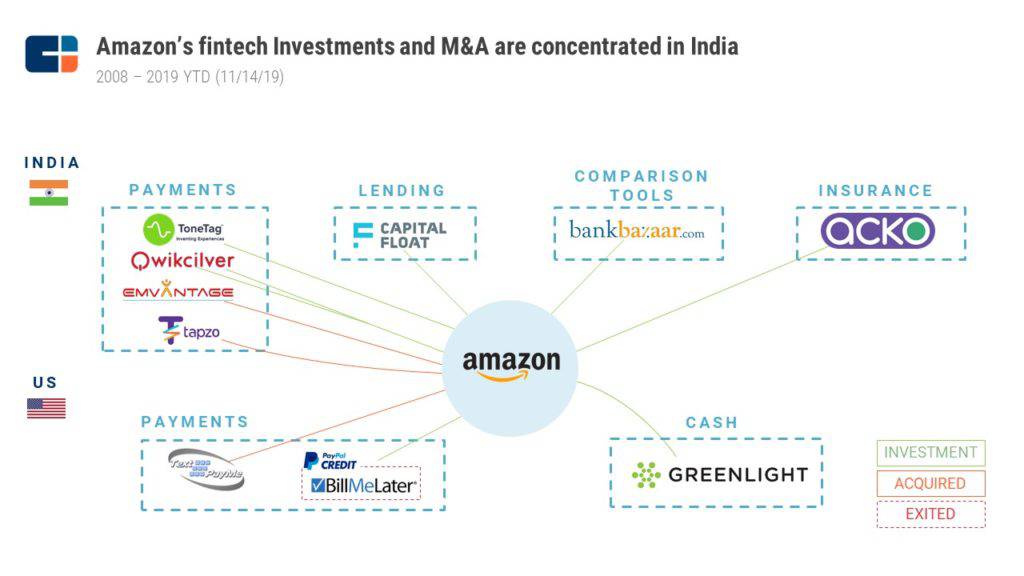