The Saudi Central Bank, previously known as Saudi Arabian Monetary Authority (SAMA), is planning to go live with open banking during the first half of 2022. The Go-Live Phase will be the third and last phase of SAMA’s open banking strategy, and will precede the Design Phase and the Implementation Phase.

SAMA’s open banking roadmap was outlined in a new policy paper released on January 10, 2021, which articulates the regulator’s implementation plan and its ambitions for open banking.

According to the paper, SAMA believes that open banking will provide financial sector stakeholders with the opportunity to leverage on the customers’ data to develop innovative products and services. For consumers, open banking will give them access to “better financial products and services” including aggregation tools, smoother onboarding experiences and more convenient digital banking solutions.

The Design Phase, which will commence in H1 2021, will focus on designing the open banking ecosystem including the technologies and processes, as well as defining the governance model for market participants.

The Implementation Phase, which will begin in H2 2021, will see the development of defined regulatory frameworks, technology building blocks, and rollout activities including testing with financial market participants as well as enhancement of customer awareness.

Finally, the third and final phase, the Go-Live Phase, will see the open banking ecosystem being formally launched in Saudi Arabia. It will also include initiatives aimed at supporting customer awareness and ensuring continuous improvement in developing the infrastructure.

During the entirety of its open banking strategy, SAMA says it will work with the industry to gain insight and build an open banking ecosystem that’s beneficial to all stakeholders’ needs.

The policy paper follows the launch of a series of regulations and initiatives including the issuance of the Payment Services Provider (PSP) Regulation and the launch of licenses for non-bank financial institutions both in 2020.

On February 21, 2021, SAMA will be launching the Instant Payment System which will allow for financial institutions, companies and individuals to complete transactions instantaneously across various banks.

The system, developed by Saudi Payments, will be launched after the successful activation of its first pilot phase with several domestic banks, the regulator said on February 11, 2021.

Fintech is one of the hottest startup segments in Saudi Arabia. Together with e-commerce, the top two industry by deals represented 30% of total transactions in the country in 2020, data from Magnitt show. 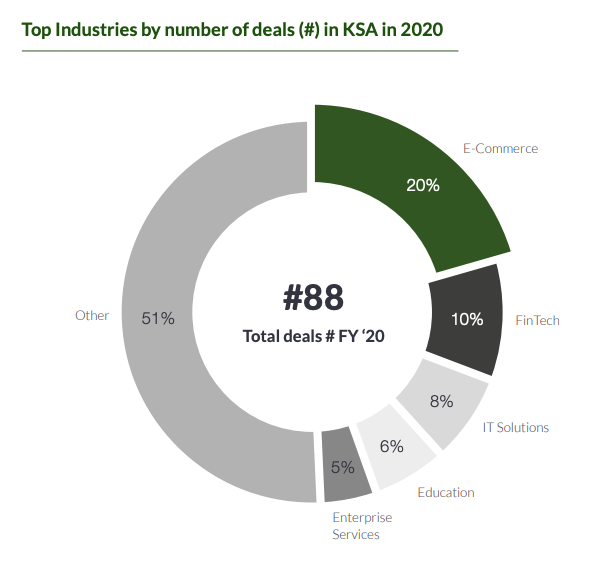 According to the 2019/2020 Fintech Saudi Annual Report, produced in collaboration with KPMG, the domestic fintech industry has been growing at a rapid pace. Between 2017 and 2019, the value of fintech transactions increased at a rate of 18% each year, reaching over US$20 billion in 2019.

Mobile payments in particular has surged exponentially with the number of transactions increasing by a staggering 352% to 19.7 million in April 2020, compared to just 4.4 million in April 2019. Saudi Arabia’s digital payment industry is expected to reach transaction values of over US$42 billion by 2025, according to Statista.

Research organization Startup Genome has named Saudi Arabia one of the world’s top 20 fintech cities to watch out.