In the Middle East, Bahrain and the United Arab Emirates (UAE) have emerged as fintech leaders, thanks to the supportive ecosystems these have managed to develop for fintech development. At the same time, their leadership positions are not guaranteed going forward and several challenges remain and must be overcome, according to a new report by the Milken Institute.

Over the past two years, Bahrain and the UAE have witnessed an explosion of fintech-related activity, a growth largely driven by both governments’ efforts to diversify their respective economies and establish a welcoming legal and regulatory environment for fintech startups and mature growth platforms.

Bahrain’s and the UAE’s fintech ecosystems showcase several similarities. First, both governments have put importance in fostering a collaborative mindset. A testimony of that is the launch of two prominent accelerators: the Bahrain Fintech Bay, launched in February 2018, and the DIFC Fintech Hive, launched in January 2017.

The DIFC Fintech Hive provides a dynamic 12-week acceleration program where startups can test and develop their solutions under mentorship. Its corporate partners include Accenture, HSBC, Visa, Standard Chartered and MetLife.

Beyond facilitating networking and fostering collaboration, Bahrain and the UAE have also launched regulatory sandboxes to attract international firms to their respective countries. These sandboxes allow companies test innovative products and model businesses, while giving regulators the opportunity to reassess legacy regulatory frameworks in light of the information received from each test.

As of today, the UAE has three regulatory sandboxes: RegLab and Digital Sandbox by Abu Dhabi’s International Financial Centre, and the Innovation Testing License by the Dubai Financial Services Authority. Bahrain has one, the Central Bank of Bahrain’s Regulatory Sandbox.

Additionally, both Bahrain and the UAE have positioned themselves to act as gateways to the wider region, and by domiciling in either country, fintechs are lured by the opportunity to enter emerging markets across the Middle East, Africa, and South Asia, a combined US$8 trillion market and the home to 3 billion people, 70% of whom have limited or no access to financial services. A Gateway to the Wider Middle East, Africa, and South Asia Region, The Rise of FinTech in the Middle East: An Analysis of the Emergence of Bahrain and the United Arab Emirates, Milken Institute, September 2019

Despite their ambition to become the region’s leading fintech hubs, both Bahrain and the UAE are still early on in their efforts and only time will tell whether these initiatives will pay off, the report says. Several challenges remain and must be overcome, including the lack of local talent and required skillsets.

Another key hurdle is the amount of red tape fintech companies must deal with before launching operations locally. The cost (time and resources) spent dealing with visa requirements, licensing fees, quotas for employee hiring, and square footage requirements were cited as amongst the major issues.

But Bahrain and the UAE aren’t the only countries in the Gulf region where policymakers and regulators have implemented forward-thinking and agile policies related to fintech, a sector perceived as a leading pillar of economic diversification.

Other countries in the Middle East and North Africa (MENA) region are catching up. In Saudi Arabia, the Fintech Saudi initiative was launched in 2018 to support the fintech ecosystem, promote the Kingdom as a fintech hub, improve financial inclusion and encourage the rise of digital transactions.

Saudi Arabian Monetary Authority (SAMA) launched its own sandbox regulatory environment in February this year and has already accepted over 20 companies to join in.

Currently, the Middle East only represents 1% of global fintech investment but by 2022, estimates predict 465 fintech companies in the Middle East will raise over US$2 billion in venture capital funding.  In comparison, only US$80 million was raised by 30 fintechs in 2017. 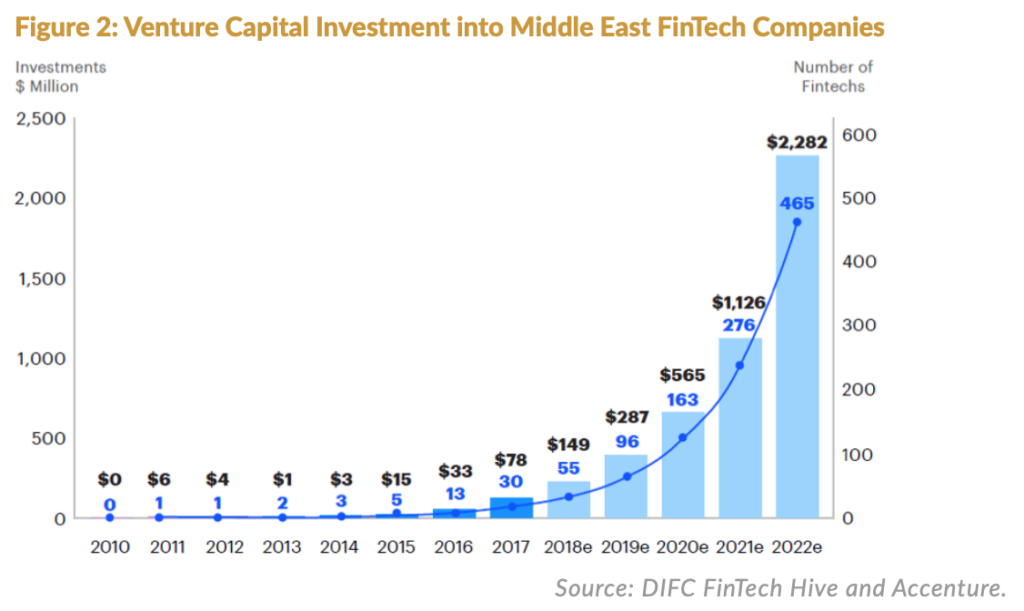 Venture Capital Investment into Middle East FinTech Companies, The Rise of FinTech in the Middle East: An Analysis of the Emergence of Bahrain and the United Arab Emirates, Milken Institute, September 2019

In the region, the payments space is the most developed fintech segment, representing 85% of all fintech firms in the MENA region. The trend comes with little surprise considering that the region is a hotbed for remittances and payment-related activity. In the UAE, for example, roughly 90% of the country’s total population are expatriates.

In addition to the region’s unique demographic, the ubiquity of mobile devices and Internet connectivity have also driven payments activity in the Middle East. 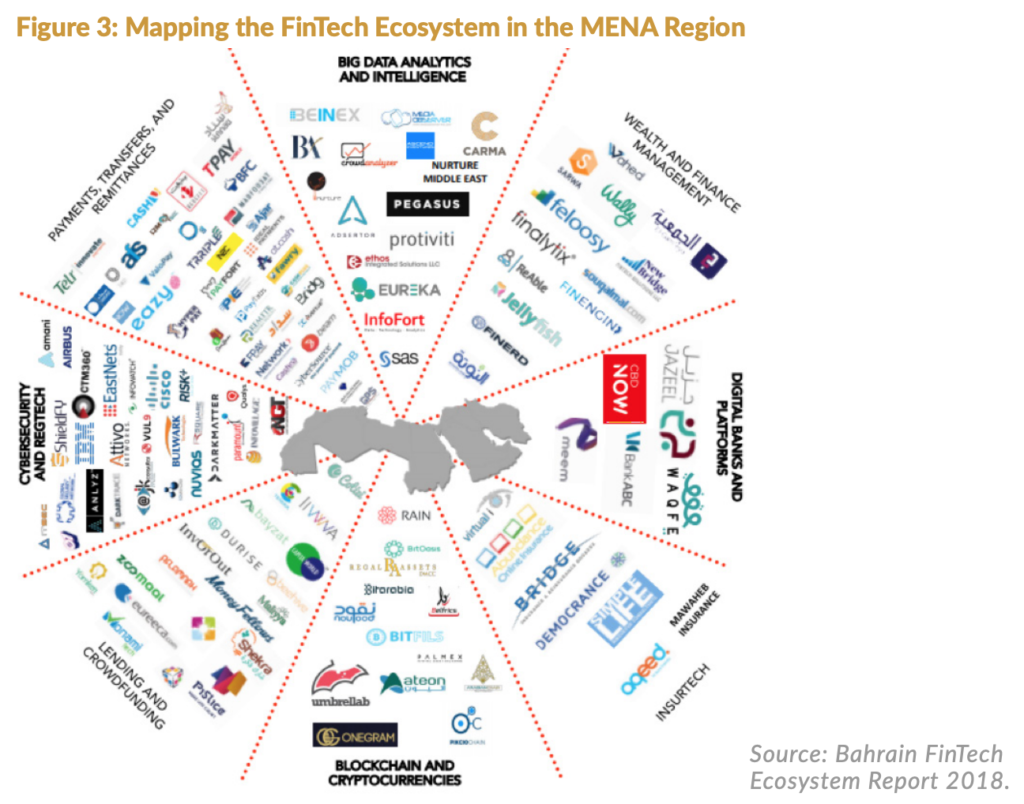 Mapping the FinTech Ecosystem in the MENA Region, The Rise of FinTech in the Middle East- An Analysis of the Emergence of Bahrain and the United Arab Emirates, Milken Institute, September 2019