UAE Fintech Report and Map 2021: Fintech is Booming in Dubai and Abu Dhabi

In the United Arab Emirates (UAE), the fintech sector continues to grow and mature on the back of rising adoption of digital payments, booming e-commerce activity and a nascent, yet vibrant, digital banking landscape, a new report by Fintech News Middle East shows.

The report, titled Fintech News Middle East: UAE Fintech Report 2021, looks at the state of the fintech ecosystem in the UAE, highlighting key developments and emerging trends observed over the past year.

According to the report, 2020 saw a uptick in digital payment transactions and a trend away from cash amid COVID-19 restrictions.

In the last two years, the total value of digital payment transactions in the UAE has more than doubled and reached US$18.5 billion in 2020, according to the World Digital Report 2021.

A 2021 survey by Mastercard found that the COVID-19 pandemic has dramatically changed consumer behavior and payment preferences with two-thirds of UAE respondents sharing that they had tried a new payment method they would not have used under normal circumstances.

Today, nearly 88% of in-person transactions are now contactless in the UAE, the Mastercard research found, and within the next year, 97% of UAE consumers plan to use at least one new method of digital payment such as wearables, biometrics, digital currencies and QR code payment, showcasing greater openness to tech-enabled payment options.

In the UAE’s rapidly evolving payment landscape, four startups have made notable strides and are worth keeping a close eye on, the Fintech News Middle East report says.

Digital banking is another segment that’s witnessed strong growth not just in the UAE but the broader the Middle Eastern region as well. Data from Dutch fintech consultancy group Fincog show that as of November 2020, over 20 neobanks operated in the region, serving more than 15 million customers.

Most of these platforms were launched by incumbents as standalone digital banks, like Liv and E20 by Emirates NBD, Mashreq Neo by Mashreq Bank, and CBD Now by Commercial Bank of Dubai, but a new generation of independent players is also emerging.

Startups like NOW Money, Rise and YAP have teamed up with incumbent banks to deliver banking and financial services. Meanwhile, others are aiming to become fully independent digital bank, like Zand, which plans to launch in the coming months and will be serving both retail and corporate customers.

Earlier this week, Al Maryah Community Bank announced that it had received its final approval from the UAE Central Bank and subsequently launched its digital banking app.

A leader in the Middle East

Across the Arab World, the UAE has the most developed and dynamic fintech ecosystem, the report says, and is recognized for its support to young startups, a private sector eager to partner up with innovative fintechs and broad access to funding for innovative ventures.

At the federal-level, key initiatives have been launched by the government to position the UAE as a major fintech and tech hub not just regionally but also globally. These include the UAE Fintech Office, and the National Innovation Strategy, and the National Artificial Intelligence Strategy 2031.

Locally, the emirates of Abu Dhabi and Dubai and their respective free zones the Abu Dhabi Global Market (ADGM) and the Dubai International Financial Centre (DIFC) have been amongst the most proactive jurisdictions in the Middle East when it comes to fintech.

Some of their key initiatives include the DIFC Fintech Hive, the largest fintech accelerator program in Middle East and North Africa, the DIFC Fintech Fund, a US$100 million fund for fintech startups, and the ADGM Digital Lab, a virtual environment that gives industry participants access to resources including data, APIs, system images and reference architecture. 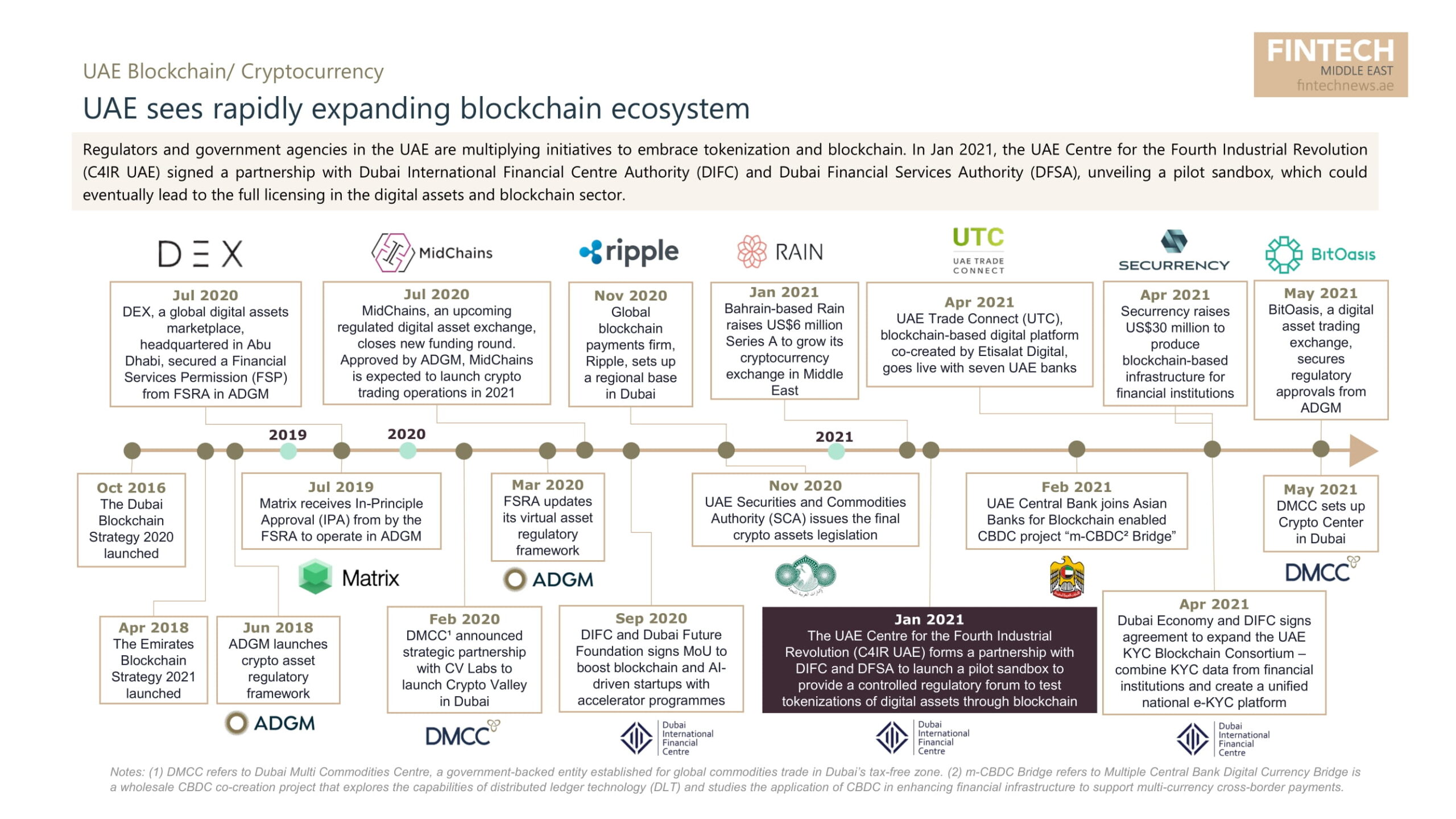 As of mid-2021, the UAE was home to 134 fintech companies, according to Fintech News Middle East, with payment/e-wallet, blockchain/cryptocurrency and insurtech being the most developed segments.

In the blockchain space, regulatory changes have helped the sector flourish. 2020 and 2021 saw federal and local authorities announcing rules to regulate and legitimize crypto-asset activities including a licensing framework by the Securities and Commodities Authority, and an upcoming crypto framework by the Dubai Financial Services Authority.

Insurtech, another fast-growing segment, has witnessed a number of startups gain notable traction, including Yallacompare, a comparison platform for financial products which claims a 75% market share of online insurance transactions in the UAE, Bayzat, a business-to-business (B2B) tech company that saw a 200% increase in monthly app usage in 2020, and Sehteq, the provider of a usage-based health insurance platform and the third largest provider of health insurance plans in the UAE. 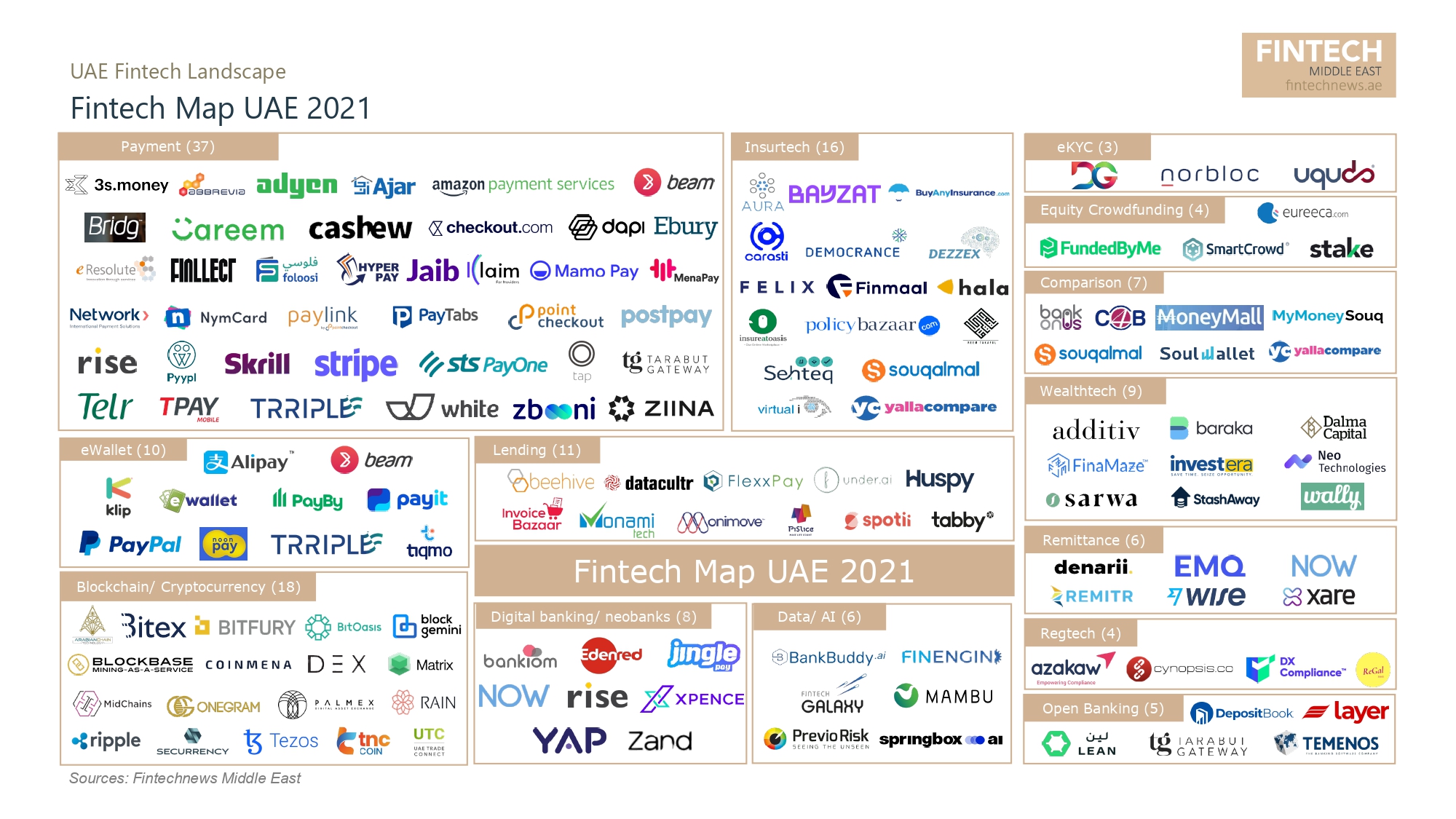 6 Banks to Launch the First KYC Blockchain Consortium in UAE