The blockchain ecosystem in the United Arab Emirates (UAE) is home to more than 120 blockchain companies and 40 government entities covering 200-plus initiatives, according to a new whitepaper by the World Economic Forum (WEF) produced in collaboration with the Dubai Future Foundation. 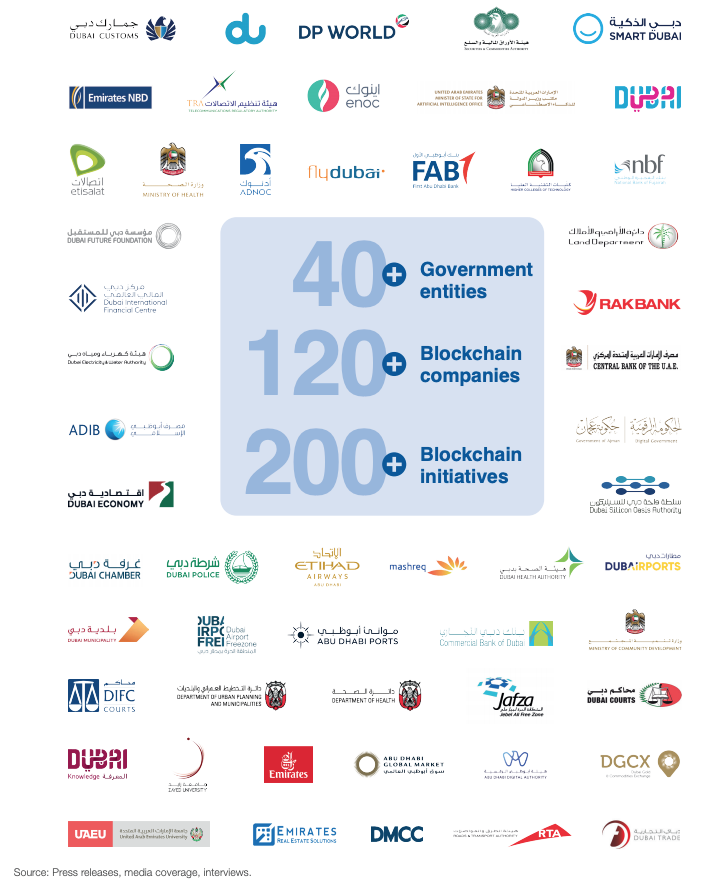 The UAE blockchain ecosystem at a glance, Inclusive Deployment of Blockchain- Case Studies and Learnings from the United Arab Emirates, WEF and the Dubai Future Foundation, January 2020

Blockchain adoption in the UAE

These strategies, in addition to other initiatives from both the public and private sectors, have allowed for numerous blockchain projects to be deployed in the UAE.

The WEF report cites the example of the Abu Dhabi Digital Authority, which has been developing a government blockchain platform to enable and support a secure, trusted data exchange mechanism between Abu Dhabi government entities and any other external organizations.

Meanwhile, the Ministry of Health and Prevention has been working on a blockchain project to combat illegal organ trading and improve the transplant process for donors and patients. Dhonor Healthtech was selected to develop UAE’s Hayat blockchain-based application. Hayat is a donor registry for recording individuals’ legal will as donors, using blockchain as a secure verification layer.

Another blockchain project by the public sector is the upgrade of Dubai Pay, a centralized payment gateway managed by the Dubai Smart Government for government payment collection. For the Dubai Pay system, blockchain has allowed for faster reconciliations and settlements between entities, as well as for transparency and immutability of financial records.

In the private sector, the paper mentions Emirates NBD’s use of blockchain to combat cheque fraud by applying a QR code on every page of a new chequebook and using blockchain as a tamper-proof verification layer.

Emirates NBD launched the new system in March 2018. In the first month of launch alone, it registered almost one million cheques on blockchain, and since its launch, the bank has witnessed a reduction in cheque fraud of 99%.

Apart from the case studies, the WEF report also shares findings from a survey of 100 stakeholders from more than 60 various governmental and non-governmental entities across the country actively exploring or implementing blockchain.

According to the report, the main challenges in blockchain implementation today in the UAE are related to the operational and regulatory sphere rather than on the technical side, showing that government entities, corporations and service providers alike are unified in their concerns about getting blockchain projects off the ground.