Financial inclusion diverges across the Middle East and North Africa (MENA), with the United Arab Emirates (UAE) taking the lead and Morocco lagging behind, according to a new report by Fintech Consortium, Bahrain Fintech Bay, and Jordan Fintech Bay.

In the MENA Financial Inclusion Report 2020, the fintech organizations explore the state of financial inclusion across MENA, delve into the key initiatives launched in the region, and share recommendations to overcome the challenges hampering financial inclusion.

According to the report, as of 2016, the financial inclusion rate stood at 20% in MENA, with men being more dominant at 19%, compared to women at only 9%.

A breakdown of key categories found that 36% of the region’s population has access to financial services, while 24% have access to payments functions. Meanwhile, only 9% have access to credit, and 12% to savings. 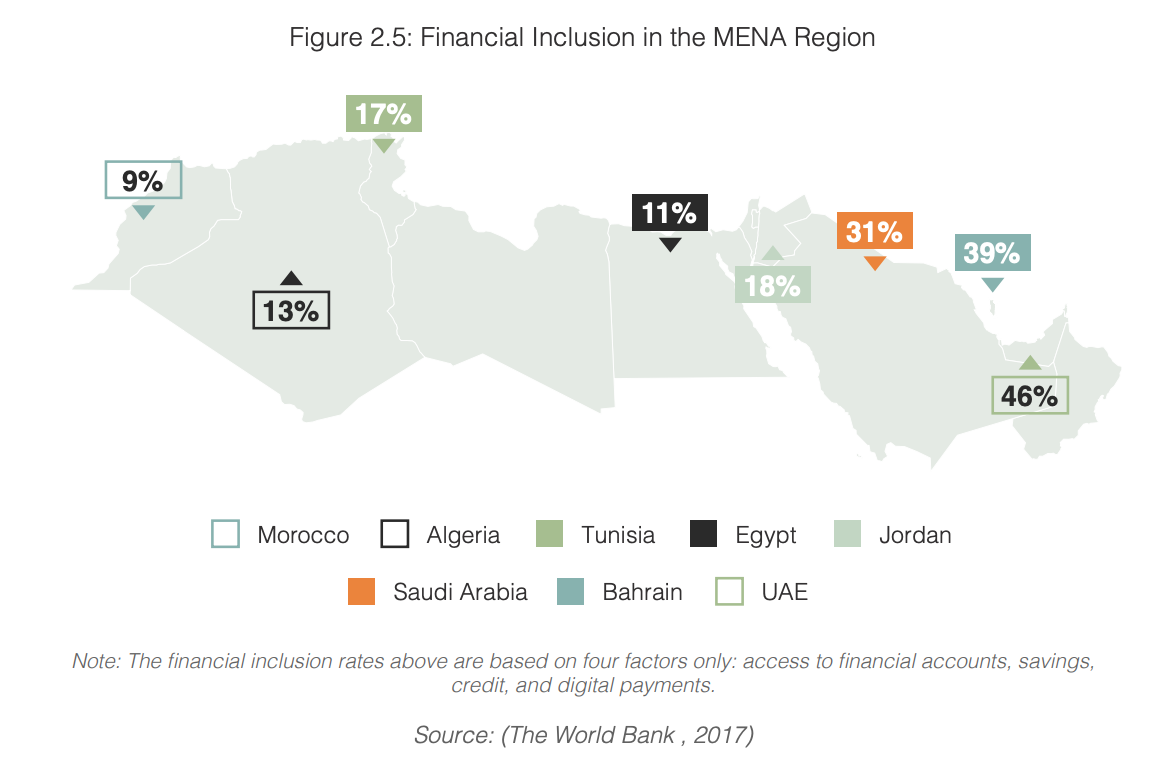 In the UAE, the financial inclusion rate is even higher for the population above the age of 15 with 87% having access to a financial account.

According to the report, the UAE’s relatively good results is due to the numerous initiatives launched by both the public and private sector to foster innovation and improve access to financial services.

In regards to digitalization, the report notes that the UAE government has played an active role in supporting the growth of the local fintech ecosystem with key initiatives that include the launch of a regulatory sandbox in two offshore sites as well as rules on crypto-assets and alternative lending, among other things.

In Bahrain, financial inclusion has been supported by initiatives from the public and private sector. These include the introduction of digital banks, improved payments systems, financial literacy projects, as well as nationwide strategies involving digitalization.

Bahrain has also encouraged innovation through the introduction of crowdfunding initiatives to fill the gap in lending and investment opportunities to SMEs and startups, and the country has set out to become a cashless economy. There are also several financial literacy thematic programs as well as training programs.

According to the report, there are currently several challenges hampering financial inclusion in MENA. In particular, it notes the knowledge gap and financial illiteracy on topics such as personal finance management, the lack of understanding of credit facilities, and limited awareness of the availability of financial services and investment opportunities.

Additionally, some people in the region still find it difficult to trust the financial system, implying that emotional and cultural beliefs are hindering financial inclusion. On this topic, the report notes the importance of Sharia compliant banking and financial services. Furthermore, the majority of the unbanked population utilize informal channels, which are embedded into the community in terms of cultural beliefs, trust and convenience, the report says.

Other major challenges include underdeveloped technology infrastructure, as well as the lack of identification documents for several underserved segments, especially refugees and low-income households, it says.

Looking ahead, the report recommends governments, regulators, the private sector, academia, and individuals to collectively adopt specific measures. And this starts with leveraging technologies such as digital know-your-customer (e-KYC) to allow individuals to open accounts seamlessly with minimum barriers.

Additionally, the increasing use of smartphones and high internet penetration rates are providing plenty for opportunities for banks and financial companies alike to build innovative solutions that are available digitally and on mobile.

But most importantly, governments must play an active role by introducing nationwide initiatives and establishing appropriate policies and legislations, the report says.