The Middle East’s fintech ecosystem grew significantly in 2017 and further development is expected in the coming years fueled by government support and increasing demand for accessible, cheap, tech-enabled financial solutions.

Fintech startups have raised over US$100 million in the Middle East and North Africa (MENA) region in the last 10 years but the number of startups launched and investments raised will more than double by 2020, said an industry expert.

“105 fintech startups were launched in the region in 2016, and it will rise to 250 by 2020. The region is small when compared to the global proposition in fintech funding, which translates to 1%,” Alan Kelly, commercial and strategy director at Informa Middle East, said at the preview event of the inaugural FinovateMiddleEast.

While still relatively small when compared with the likes of the UK or the US, the region’s fintech sector is poised for exponential growth. According to Younis Al Khouri, the under secretary of the United Arab Emirates (UAE) ministry of finance, the Middle East’s fintech sector is predicted to grow by 270% as the region seeks to keep pace with global peers.

“We have seen fintech enter the popular consciousness in a big way [in 2017] due to developments in mobile payment technology, and the introduction of blockchain technology that have ignited the public interest and pushed the sector’s growth,” he said.

The UAE, a thriving fintech hub 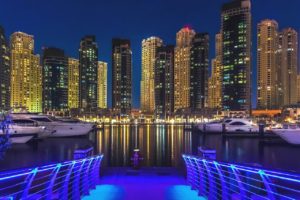 While fintech startups have sprung up in 12 Arab countries, 3 in 4 of them are based in the UAE, Lebanon, Jordan or Egypt, according to the State of Fintech report by Wamda and Payfort.

The UAE alone hosts 29% of MENA’s fintech startups. The country has played a leading role in the region’s fintech revolution, thanks to the combination of accelerators, rising investments and cross-industry partnerships which has fueled the rise of fintech.

According to the report, the UAE is the most dynamic hub with a 4-year CAGR of almost 60%. It is home to some of the region’s top fintech startups including yallacompare, formerly Compareit4me, a financial comparison platform, Democrance, an insurtech startup, and Beam Wallet, a mobile wallet app.

Islamic fintech poised to take off

For industry experts, 2018 may be a pivotal year for Islamic finance stakeholders and their approach to fintech development.

Islamic finance refers to a method of financing and banking operations that’s in accordance with Sharia, or Islamic law. The main rules that sharia-compliant financial products have to adhere to include the avoidance of all haram (harmful) activities such as charging interest, as well as ensuring that ambiguity (gharar) or gambling/speculation (maysair) is minimized in transactions and contracts. Complying with Sharia law also means that Islamic financial institutions are not permitted to invest in alcohol, pork, pornography or gambling.

But while the global Islamic financial industry is worth some US$2,000 billion, Islamic fintech is still in a very early stage with investment remaining very low.

But as sharia-compliant finance grows and institutions embrace mobile and digital banking, industry observers believe Islamic fintech has great growth potential and will offer strong opportunities for the sector.

In particular, remittances, insurance (or takaful, a type of Islamic insurance where members contribute money into a pool system to guarantee each other against loss or damage), investment advisory services and online trading are likely to be the areas to be the most impacted by Islamic fintech.

“Islamic fintech is rapidly emerging in significance and scale, and over the next few years we expect to see a remarkable growth in the sector, particularly in the emerging markets,” Raja Al Mazrouei, acting executive vice-president for the DIFC Fintech Hive, told the Banker.

“By virtue of its guiding principles and technological potential, Islamic fintech holds the key to unlocking the large and untapped market [of the unbanked] through low-cost, digital and sharia-compliant products.”

In addition, a new facility called Bahrain Fintech Bay is set to open in February 2018. It promises to be the largest dedicated fintech hub in the Middle East and Africa. The initiative is supported by the Central Bank of Bahrain, the Economic Development Board of Bahrain and the Bahrain Development Bank.