In the United Arab Emirates (UAE), peer-to-peer (P2P) lending has emerged as a way to support local small and medium-sized businesses (SMEs), many of which have been rejected by conventional banks.

According to data from Khalifa Fund, approximately 50-70% of SMEs applications for funding are declined by traditional banks. Loans to SMEs account for less than 4% of the outstanding bank credit in the UAE, below the Middle East and North Africa (MENA) region average of 9.3%.

Lenders are sometimes unwilling or unable to serve SMEs given their limited assets or lack of proven record of company operations. This makes it difficult for SMEs to do business and finance provisions can be expensive or inflexible.

Yet, in the UAE, some 350,000 companies fall under the SME category, according to the Ministry of Economy. The sector represents more than 94% of the total number of companies operating in the country and contributes nearly 60% of the UAE’s GDP. The figure is estimated to grow to 70% by 2021.

The need for crowdfunding to support the local economy has pushed regulators to find ways to boost fintech and facilitate the growth of the sector.

Peer-to-peer lending and crowdfunding activities are new concepts which are currently applied on a narrow basis and yet to be regulated and introduced at a wider level. 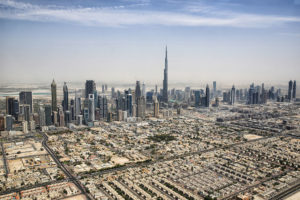 Yet, in 2017, the Dubai Financial Services Authority (DFSA) launched a regulatory framework for loan and investment-based crowdfunding platforms. The move was considered the first framework of its kind in the Gulf Cooperation Council (GCC) countries.

The introduction of the regulation was intended to license, organize and protect the rights and obligations of all parties involved in specific crowdfunding activities in the UAE. It is part of the DFSA’s regulatory roadmap to create an innovation-friendly ecosystem, in line with the government’s broader National Innovation Strategy.

Commenting on the launch of the regulatory framework in August 2017, Ian Johnston, the chief executive of the DFSA, said that crowdfunding platforms represented an “increasingly important source of financing for the SME sector.”

“By creating a clear set of rules for operators, we hope to encourage the sustainable development of this industry,” Johnston said.

The introduction followed the launch of the Fintech Hive at the Dubai International Financial Centre (DIFC), an initiative aimed at bringing together the “next generation of leaders and entrepreneurs to compete and address the growing needs of the region’s financial services industry using innovative technology solutions.”

Government support, favorable regulations and growing demand for tech-enabled financial products have led to the emergence of a thriving peer-to-peer lending space in the UAE. 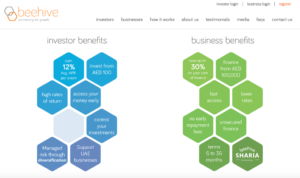 Beehive is one of the most popular platforms in the country. The company is known for being the first business online lending platform to be officially authorized and regulated by the DFSA. Beehive connects companies looking for finance with investors, eliminating the cost and complexity of conventional finance: investors get better returns and businesses get faster access to lower cost finance.

As of October 2017, Beehive had successfully facilitated finance over US$35 million to more than 200 businesses funding requests and registered more than 5,000 international lenders. The startup raised US$5 million in its Series A funding round.

Eureeca, an equity crowdfunding startup with offices in Dubai, London, Amsterdam and Kuala Lumpur, was the first service of its kind to be licensed by the DFSA.

Launched in 2013, Eureeca enables members of its investor network, who range from casual and angel investors to institutional firms, to buy shares in growth-oriented businesses, while providing operational businesses with crucial access to capital.

“Aber” Project, The Common Digital Currency Between SAMA and UAECB