Fintech sandboxes are a popular way for regulatory authorities in the Middle East to play their part in supporting fintech innovation.

Sandboxes are testing environments where entrepreneurs and innovators can experiment with their solution in a controlled space. This allows them to develop and tweak their solution accordingly, while giving regulators control over new entrants in the market.

For the Middle East, where many countries have comprehensive regulatory regimes and a tightly controlled banking and financial sector, sandboxes are an ideal way to introduce startup innovations into the market while holding the reins. 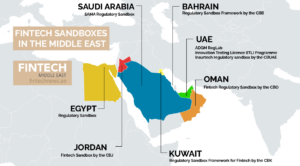 The Abu Dhabi Global Market’s (ADGM) RegLab is a regulatory sandbox based in the UAE. It is the first reglab in the region, and the world’s second most active fintech sandbox, the ADGM RegLab said on its website. A total of 26 fintechs startups have been accepted into the 2016-launched sandbox across three cohorts, and four in its latest fourth cohort.

The sandbox is open to both new players and existing financial institutions. Some of its more popular companies include NymCard, YallaCompare and NOW Money.

The ITL Programme is run by the Dubai Financial Services Authority (DFSA) under the Dubai International Financial Centre (DIFC). Eligible applicants typically test solutions for 12 months. The ITL Programme has so far accepted 51 applicants from a pool of 105, it said in a previous statement, and opened applications for a new cohort during July this year.

The programme was launched in 2017, and includes companies such as Mamo Pay and Sarwa.

The Central Bank of the UAE (CBUAE) runs a third sandbox in the UAE for insurtech companies. The sandbox framework was announced in February last year. This sandbox is not as active as those run by the ADGM and DFSA. Nevertheless, the sandbox runs for 6-12 months, according to official documents, and is open to both local and foreign fintech companies.

The Central Bank of Bahrain (CBB) runs a nine-month Regulatory Sandbox with an extension period of three months. The sandbox is a “virtual space” for both licensed and other firms to test their solutions in fintech or the financial sector in general.

The CBB’s Regulatory Sandbox Framework was first issued in 2017, and includes companies such as Tamara and tabby.

The sandbox started receiving applications in December 2019, and last admitted a third cohort in April 2020. Applications for the 2021 cohort were open between January and February this year.

The Central Bank of Egypt launched its Regulatory Sandbox in 2019. It has been counted as one of the several policy-level initiatives by the CBE to encourage fintech innovation in the country. The Regulatory Sandbox currently has its second cohort in progress.

A number of other sandboxes also exist in the Middle East. These are at different stages of development. Some were only recently announced. Some others have been in place for up to three years, but not much has been reported on them. These are:

AMF’s Buna and Mastercard to Provide Interoperable Services Through MoU