Today, the region is home to 25 digital banks which serve a combined 25 million people, according to a new report by the BPC Group, a Swiss software company, and the Fintech Consultancy Group (Fincog), a professional services firm from the Netherlands. 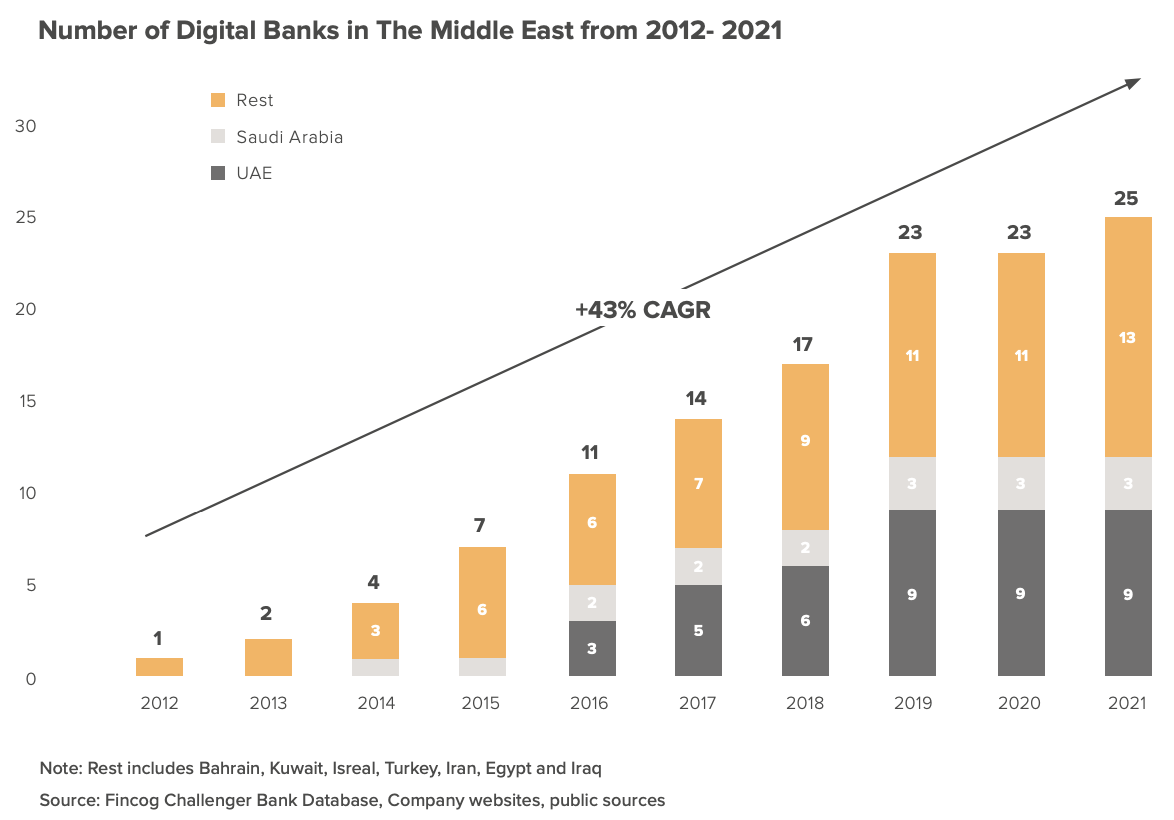 According to the report, the United Arab Emirates (UAE) currently stands as the region’s largest digital banking hub, housing the most digital challengers across the whole Middle East with nine players. The UAE is followed by Turkey with four players, and Saudi Arabia and Israel with three companies each. 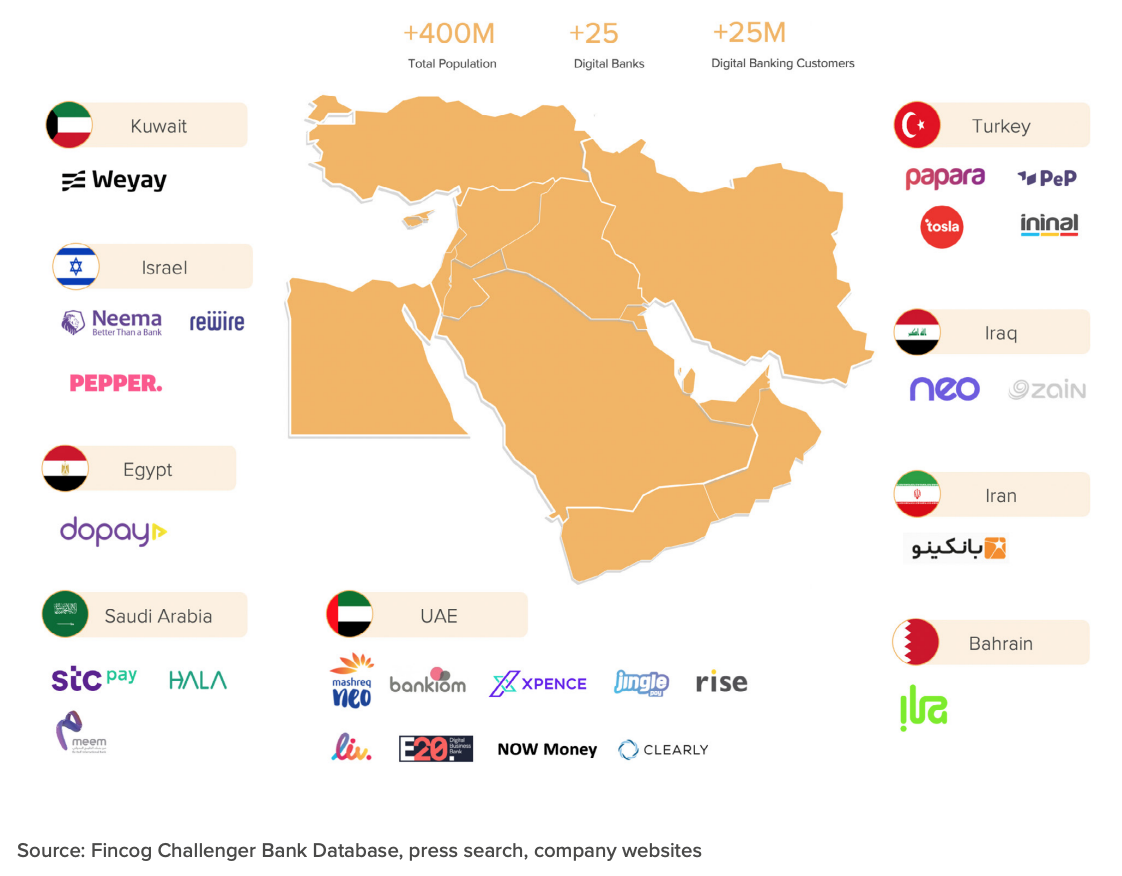 The Middle East’s fast evolving digital banking sector has been enabled by a number of factors, the report notes, naming governmental pushes, supportive initiatives, and favorable demographic characteristics such as the region’s considerable pool of unbanked and financially underserved, its young and digitally-savvy population, and high Internet penetration.

According to the analysis, three main categories of digital banks are present in the Middle East. The first category involves initiatives led by incumbent banks themselves. It is currently the most prevalent model and is a testament of banks’ desire to remain relevant in this evolving market amid changing customer expectations.

Built for millennials, the digital banking offering provides a number of innovative services and capabilities including an artificial intelligence (AI)-enabled virtual assistant called Olivia that services customer inquiries and a wallet that gives users insights into their financial behaviors.

Another digital banking service provided by a traditional bank is Ila Bank, a mobile-only and cloud-first digital bank in Bahrain owned by Bank ABC. Launched in 2019, Ila Bank offers services including a current account with flexible funding options, credit cards and savings.

Its key differentiators and capabilities include sophisticated data analytics and AI with human understanding, tailored solutions for customers, and its international perspective with remittances and the ability to link foreign current accounts.

The second category of digital banks outlined in the report is the non-financial institutions. These are the payment companies, investment companies and other players that are not originally from the banking sector but which expand into the industry later on.

In the Middle East, an example is STC Pay, the wholly-owned fintech subsidiary of STC Group. STC Pay operates one of the Middle East and North Africa (MENA)’s largest digital wallet with eight million accounts, and was granted last year a digital banking license by the Saudi Central Bank (SAMA).

STC Pay’s success factors include its clear focus on facilitating transactions both online and at physical stores, simplifying commerce, and its large existing customer base.

Finally, the third and last category outlined in the report is the neobanks, a segment that comprises new, independent, digital-only players with their own banking license. The segment remains rather negligible, though recent efforts to introduce digital banking licensing regimes and lower barriers to entry have set the foundations of this new category to emerge.

In the Middle East, Saudi Arabia has been among the pioneers on the topic, having started issuing its first digital banking licenses in 2021. SAMA has so far granted three licenses to STC Pay, D360 Bank, and Saudi Digital Bank but the banks have yet to go live.

Other countries in the Gulf Cooperation Council (GCC) have also shared plans to introduce new licensing frameworks. These include Qatar, which said in March 2022 that was studying the possibility of introducing a digital banking license.

The Middle East’s nascent digital banking industry is growing on the back of soaring customer adoption of digital financial services.

A 2022 study by Australian financial comparison website Finder found that the UAE has grown to become one of the world’s biggest adopters of digital banking, ranking sixth in digital banking penetration.

Finder, which conducted a global survey of 1,015 respondents in April 2022, found that of the UAE consumers surveyed, 19% indicated having a digital bank account and an additional 15% sharing intent to open one in the next year. This takes adoption to a forecasted 34% in 2023 and to 41% in 2027.

Moving forward, the BPC Group/Fincog report notes that several trends and opportunities are emerging in the Middle East. These will further fuel the growth of the region’s digital banking sector.

Trends including rapid adoption of open banking, regulatory reforms and economic development plans like the Kuwait: Vision 2035, the UAE Vision 2030, and the Qatar Vision 2030 National Fintech Strategy will continue building the foundations for digital banking to thrive, the report says.

Furthermore, new digital banking players can tap into opportunities in fields such as Islamic finance, cross-border payments and remittances, and e-commerce and small and medium-sized enterprises (SMEs), which, despite having witnessed growing demand, remain largely untapped.

Top 10 Most Well-Funded Fintech, Insurtech Startups in the Middle East