The Commercial Bank of Dubai (CBD), announced late in November that it is launching “CBD Now”, Dubai’s first digital-only bank. They aim to target millennials and digitally connected customers early in 2017.

“The launch of CBD Now during 2016 UAE’s innovation week is a timely example of how CBD supports the vision of the UAE government to develop innovation and drive client happiness.”

Digital-only Banking allows customers to totally change how they manage their finances. They can now use smart technology to fulfil all their banking needs. CBD will offer customers a technologically smart, and seamless mobile bank, personalised to enable them to perform all their usual financial services from anywhere via their smartphone. So whether it’s managing your current accounts, savings accounts or credit cards that you need, this new development will serve you well.

This news comes hot on the heels of Emirates NBD’s announcement in June that they would be investing Dh500million (US$136million) in digital banking systems. Mindful of the fact that the bank is losing its appeal with Millennials, this move is aimed squarely at younger customers.The bank’s Chief Executive, Mr Shayne Nelson said,

“We are making a commitment to the future with our digital transformation plan.”

The move into digital banking, globally, has seen huge benefits for banks and customers. For customers there is a huge improvement in convenience and speed of service, whereas these systems also make cost savings for the banks. There are approximately 800 million customers now using mobile banking systems worldwide. This number is expected to increase to over 1.9billion by the year 2019, according to a report by the auditing company KPMG. 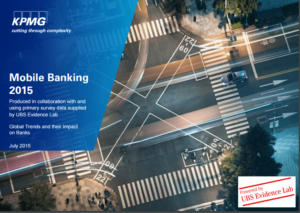 The UAE has a young and affluent population, which is driving the move to digitisation. According to a recent Google study, its 9.2 million population has the highest penetration of smartphone use in the world, at about 70 per cent. Traditionally here, cash has always been king, with credit cards often shunned by young affluent people. However, the ease of use of digital banking is starting to capture the imagination.

EY GCC Digital Banking Report 2015 found that half the banks they surveyed have budgeted between US$5 million and US$20 million for digital initiatives. These included automation, channels, customer journeys and new technologies etc. Furthermore they found that many of the larger banks were demonstrably willing to spend even more. Possible even more exciting was the fact that banks saw this as a rebirth, rather than an incremental approach to modernisation. Digital-first, a Sharia-compliant retail bank in Saudi Arabia, more than demonstrated this.

The island kingdom of Bahrain is also moving swiftly to keep up. A number of state bodies including the Central Bank of Bahrain (CBB) are involved in looking at ways in which to develop its fintech sector. Areas of interest are: Islamic finance, in which in which Bahrain has strong global standing; crowdfunding; payment services; online wealth management service (robo-advisors); and blockchain. “We believe our customers have a lot of know-how when it comes to banking services. Customers can assist during the piloting phase to influence product development and refinements before rolling out the brand to the public.”

Things are really hotting up in the digital banking sector within the Emirates.