The Bahrain Fintech Regulations Report 2019, partly produced by the Central Bank of Bahrain, showcases some of the regulations and initatives set up to cultivate the growth of fintech in their regions. Each region with a strong fintech scene has their own way of tackling the burgeoning scene, but based on our own look into the report the United Arab Emirates (UAE) has some catching up to do in holistic regulations—or regulations that can cover all the important global fintech developments

Besides the interest of protecting their populace from unmitigated risks, setting clear regulations in stone is important for a nascent fintech scene to thrive. With clear regulations, investors have a higher assurance about pouring money into local fintechs, and local firms can grow their businesses without worrying about having to overhaul their whole model down the road due to sudden introduction of new regulations. 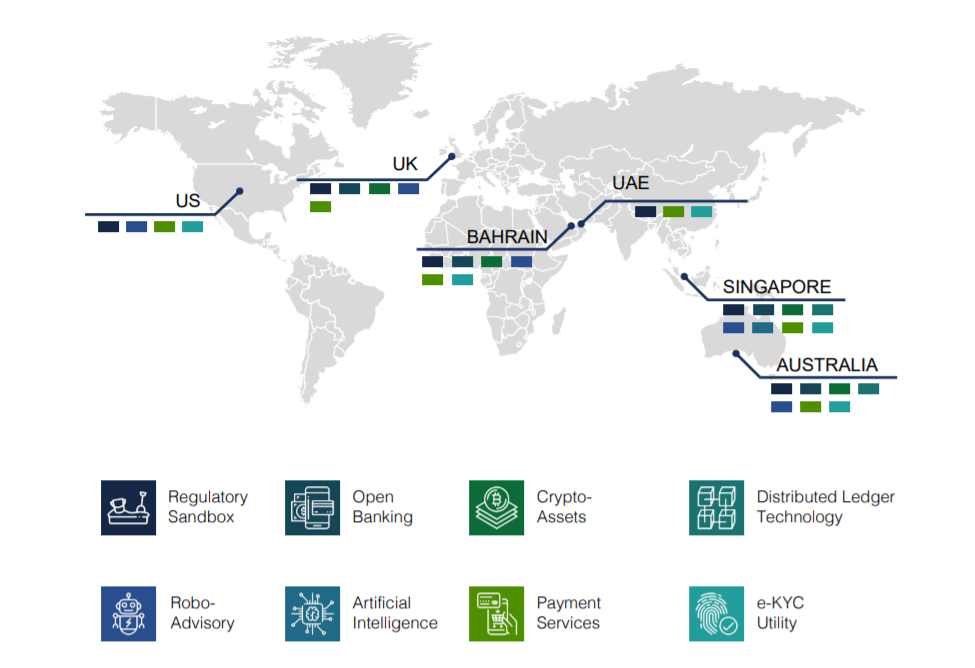 As the above photo shows, the UAE region showcases the lowest variety of regulations, missing out on the now popular open banking regulations, along with crypto-assets, robo-advisory, and artificial intelligence.

Where UAE’s authorities may lack in concrete regulations though, they do make up for in regulator initiatives to support growth. With initiatives in some fields that lack regulation, we think regulations may come soon.

Some regulatory initiatives by authorities affecting fintech include:

In May 2017, DFSA launched an “Innovation Testing License” for fintechs, allowing firms to test their concepts within DIFC’s territory. 45 fintechs total are brought into the sandbox in cohorts; 7 of those just adopted in January 2019.

Similarly, the FSRA launched the RegLab sandbox, one of the pioneering licensing frameworks for fintech in the region. The sandbox has accepted 3 cohorts totaling to of 26 international and local firms. Cohorts are given two years to test their concepts, to graduate as a licensed firm in Abu Dhabi Global Market (ADGM)’s offshore territory.

ADGM also partnered with ASEAN Financial Innovation Network (AFIN) in November 2018 to launch the first pilot stage of a cross-border digital sandbox that can operate between both hubs.

Alternative lending allows segments of populations that wouldn’t be privy before to gain smaller-scale loans even if they don’t necessarily have credit history. The ability to reach previously underserved markets have allowed alternative lending to become popular in regions like China, Indonesia, India, Singapore, etc.

Since UAE’s startups and small businesses could use access to alternative financing, on the 31st of January 2017, DFSA launched draft regulations on loan-based crowdfunding. The entity accepted two rounds of feedback in February 2018 from the public for two separate series of the framework. The second paper in the series was launched during February 2017 and focused on investment-based crowdfunding.

Additionally, DFSA launched P2P lending regulations on 1 August 2017 following the regulation of Beehive as the first P2P platform in the region.

To that end, the FSRA launched a regulatory framework for crypto-asset related initiatives including exchanges. Using a case-by-case approach, FSRA will determine the whether the crypto-asset is a coin token or commodity. In the instance it is a coin token, the crypto-asset will be subjected to the Financial Services and Market Regulations; whereas a commodity token will remain unregulated. Under the Financial Services and Market Regulations, FSRA issued a guidance on the regulation of ICO and virtual currencies. This initiative was pushed by the UAE Blockchain Strategy 2021 that aims to have 50% of all governmental transactions to be conducted on the blockchain network by 2021.

FSRA was the first regulating authority in UAE to issue guidance and regulations on the activities relating to crypto-assets.

E-KYC (Electronic Know Your Customer) processes have come into bigger focus thanks to the need to regulate the movement cryptocurrency via exchanges, but there is clear value in it for use in other fintech sectors.

In December 2018, ADGM launched an electronic KYC (e-KYC) plan by completing the first part of a project that helps financial institutions use innovation technologies to meet regulatory requirements. The plan utilized key technologies such as blockchain and the project includes key financial institutions including First Abu Dhabi Bank and Abu Dhabi Islamic Bank. The FSRA played an active role in the initiative through the development of a framework to regulate such technologies.

In January 2017, the UAE Central Bank launched regulations on digital payments through the Regulatory Framework for Stored Values and Electronic Payment Systems; mandating licenses for electronic payment services providers. The regulations also zoned in on overseeing outsourcing services by licensees and security protocols for consumer protection.

The need for UAE regulators to speed up fintech initiatives

Between the variety of fintech-related sandboxes, along with their case-by-case approach towards crypto-asset regulation may be time-consuming, but what the various regulators have deemed as the best middle ground between protecting the interests of their constituents, while still allowing for innovation to seed into the kingdom and grant more financial services to its constituents.

There is also the possibility that all of this is also a temporary measure, and a way for these regulators to observe the impact of fintech on its constituents—which would later allow these regulators to come up with applicable and long-lasting regulations.

The only caveat now is that in the meantime, the kingdom may only see fintech innovations at a slow crawl during this mulling period, while other regions may stride ahead.

For a deeper dive into UAE’s regulators in relation to others, you can check out the Bahrain Fintech Regulations Report 2019.

Blockchain-as-a-Service Launch In The Middle East