The UAE is emerging as a regional hub for fintech in the Middle East. Off to a strong start in 2021, the UAE is quickly its position as a leader in this space across the MENA region, providing a boost to fintech in Dubai and Abu Dhabi.

The general startup ecosystem in the UAE is already looking optimistic this year, with total funding in H1 2021 growing 69% year on year, according to Magnitt. Fintech investments reflected this growth, increasing 49% year on year. Meanwhile, the fintech sector emerged top of the leaderboard by the number of transactions in Q1 2021, and third by funding.

In the Fintech News Middle East: UAE Fintech Report 2021, mapped 134 active fintechs in the UAE, a majority of which are in the payments sector. In fact, digital payment transactions in the UAE last year surpassed US$18 billion, and 88% of in-person transactions were contactless.

Moreover, while the Middle East boasts over 20 digital banks and neobanks, serving over 15 million customers, At least half of these are located in the UAE. Insurtech and blockchain are also up-and-coming sectors in the UAE’s fintech space, while e-wallets are still at an early stage, accounting for about a fifth of payments in the country. Elsewhere, as outlined in the report, the UAE also unveiled a pilot sandbox for the licensing and regulation of digital assets and blockchain this year in Dubai.

The UAE also represents the highest fintech adoption amongst banking customers, and is home to most of the Middle East’s fintech companies as of 2020, according to Deloitte.

Payments technology and buy now pay later solutions are especially facing tailwinds, while local and international players gear up for an increasingly competitive landscape. For the Emirati capital of Abu Dhabi, and the country’s commercial hub Dubai, this points towards a strong growth trajectory for fintech.

Fintech in Dubai and Abu Dhabi 2021

Early but promising signs for fintech in Dubai

The fintech space in Dubai is a leading regional contender. It ranked second after Tel Aviv in the Findexable regional fintech rankings for 2021, not just for the Middle East, but for the entire MENA region.

On a global level, however, fintech in Dubai still has a ways to go, as the global rankings demonstrated. While Tel Aviv ranked fifth worldwide for fintech, Dubai came in far behind at the 55th spot.

Fintech in Dubai is overseen by the Dubai International Financial Centre (DIFC), which has undertaken a number of initiatives to promote fintech in the emirate. This includes its accelerator programme DIFC Fintech Hive, and a US$100 million Fintech Fund as well.

Dubai has also welcomed international players to its fintech landscape. American payments tech unicorn Stripe, for instance, kicked off its UAE operations by launching a base in Dubai Internet City, its first office in the Middle East. The company has already undertaken beta tests with UAE-based companies Illusions Online, Aceplace, ChatFood, and WeKeep.

More recently, payment processing service Amazon Payment Services also launched the Amazon Fintech Lab at DIFC Innovation Hub last month. The Amazon Fintech Lab will serve as a hub for networking, mentoring, and researching, and will feature roundtables, workshops, and keynotes, on digital services and fintech. The initiative aims to hold a series of events for SMEs, financial institutions, and startups at DIFC.

Elsewhere, Mashreq, which happens to be Dubai’s oldest bank, is also buying into the trend of fintech in Dubai. The bank announced that it would be dialling down the number of its physical branches to 10 by August this year, from 34 branches two years ago, in a bid to embrace digital banking.

All in all, it’s an early but quickly expanding innings for fintech in Dubai. 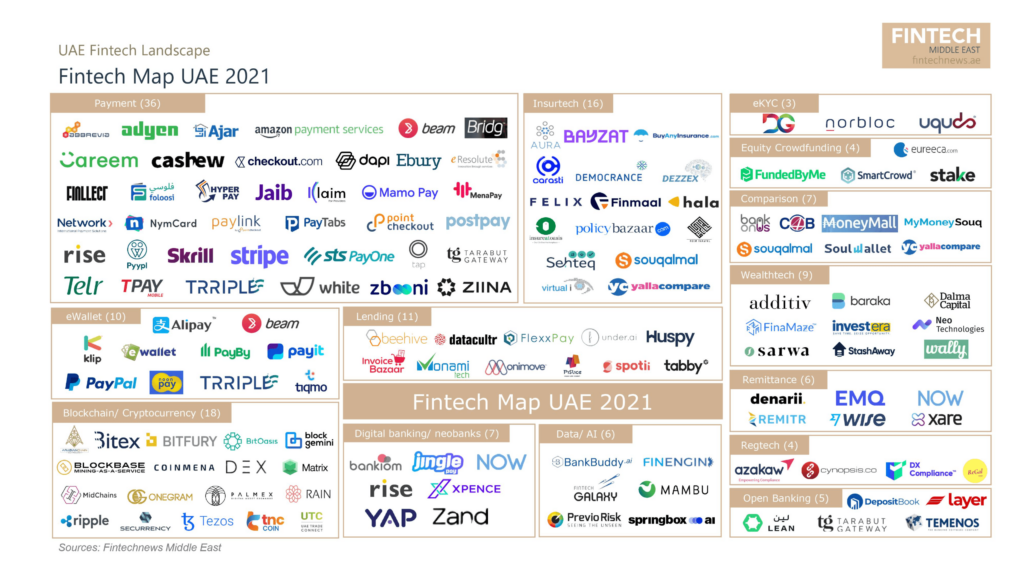 Similar to DIFC, the Abu Dhabi Global Market (ADGM) is mandated with the task of developing the fintech space in Abu Dhabi. And like its Dubai-based counterpart, ADGM too has taken a number of initiatives to achieve the same.

For instance, the ADGM RegLab provides a controlled environment for fintech companies to test out their solutions. The fintech sandbox operates within a customised regulatory framework, and claims to be the world’s second most active fintech sandbox, presumably after Singapore.

ADGM also recently announced the fifth edition of its Fintech Abu Dhabi conference, which went virtual last year due to COVID-19 restrictions. The 2020 iteration of the conference was its largest ever yet, bringing 25,000 virtual visitors worldwide.

Taking place in November this year, Fintech Abu Dhabi 2021 seeks to promote fintech through a number of platforms, including the Fintech100 programme, an Innovation Challenge, a Government Fintech Forum, and Fintech Awards as well.

There is some surface-level activity in the fintech investment space as well in Abu Dhabi. For instance, the emirate’s sovereign investment company Mubadala led a US$23 million Series A round with Arbor Ventures in Dubai-based buy now pay later company tabby. The company offers interest-free deferred payments solutions in the UAE and Saudi Arabia.

Meanwhile, NymCard, a fintech company with headquarters in Abu Dhabi, recently raised US$7.6 million in its Series A, while the Abu Dhabi Investment Authority picked a minority stake in Indian fintech MobiKwik for US$20 million.

Further, the emirate is also home to Plug and Play Tech Centre’s only Middle East location. The acceleration platform runs two accelerators in Abu Dhabi in partnership with the Abu Dhabi Investment Office. One of these is dedicated to fintech.

Ultimately, Abu Dhabi has started to attract a trickle of investments as well as companies, such as cloud banking platform Mambu, to the emirate. The emirate also tailed just behind the top cities in the Findexables regional rankings, coming in sixth for the MENA region, and fourth for the Middle East. This was also the first time that Abu Dhabi made an appearance in the rankings.

From a zoomed out perspective, the push towards fintech in both Abu Dhabi and Dubai is indicative of the UAE’s drive to diversify the economy away from oil, tapping into its long-standing progressive approach towards technology. This is also evidenced by the UAE’s FinxAr rankings, which assesses progress in the fintech industry in Arab countries. The UAE ranked first in these ratings, achieving an average score of 75%.

Overall, fintech in Dubai and Abu Dhabi may see some friendly competition in the short term, and a longer synergy as the UAE makes broad strokes towards a tech-first economy.