Israel’s Emergence as a Fintech Nation

With more than 500 fintech companies, Israel is rapidly emerging as a fintech powerhouse with players in the sector attracting global attention as well as billions of dollars in venture capital.

In 2019, equity investments in Israeli fintech reached an all-time high of US$1.8 billion, representing a 107% increase over 2018, and a 300% increase over the prior five years. The figure placed Israel fifth in global fintech investments after China, the US, the UK, and India, according to a report by Start-Up Nation Central. 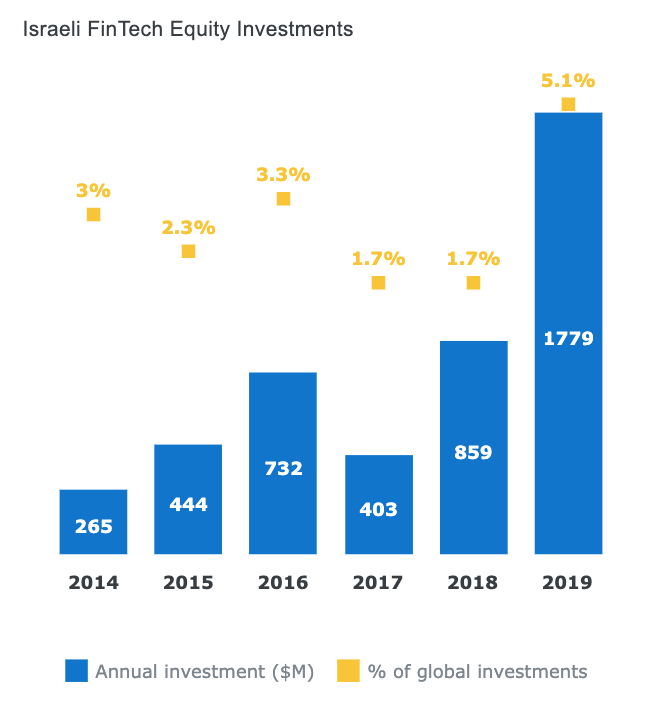 2019 also saw six mega rounds of more than US$100 million going towards fintech companies totaling over US$1 billion. These deals included Lemonade (US$300 million), Next Insurance (US$250 million) and Fundbox (US$176 million). Israeli venture capital fund Viola Ventures provides a Israel Fintech Map that features the country’s fintech companies and exits. The last version, updated on June 17, 2020, gives an overview of the Israeli fintech startup landscape, categorizing the companies based on their subsegment.

Recognizable names include Payoneer, a leading cross-border payments platform, Pagaya a wealthtech startup that has just raised US$102 million in its Series D, and Riskified, which provides software-as-a-service (SaaS) fraud and chargeback prevention technology for the e-commerce sector. 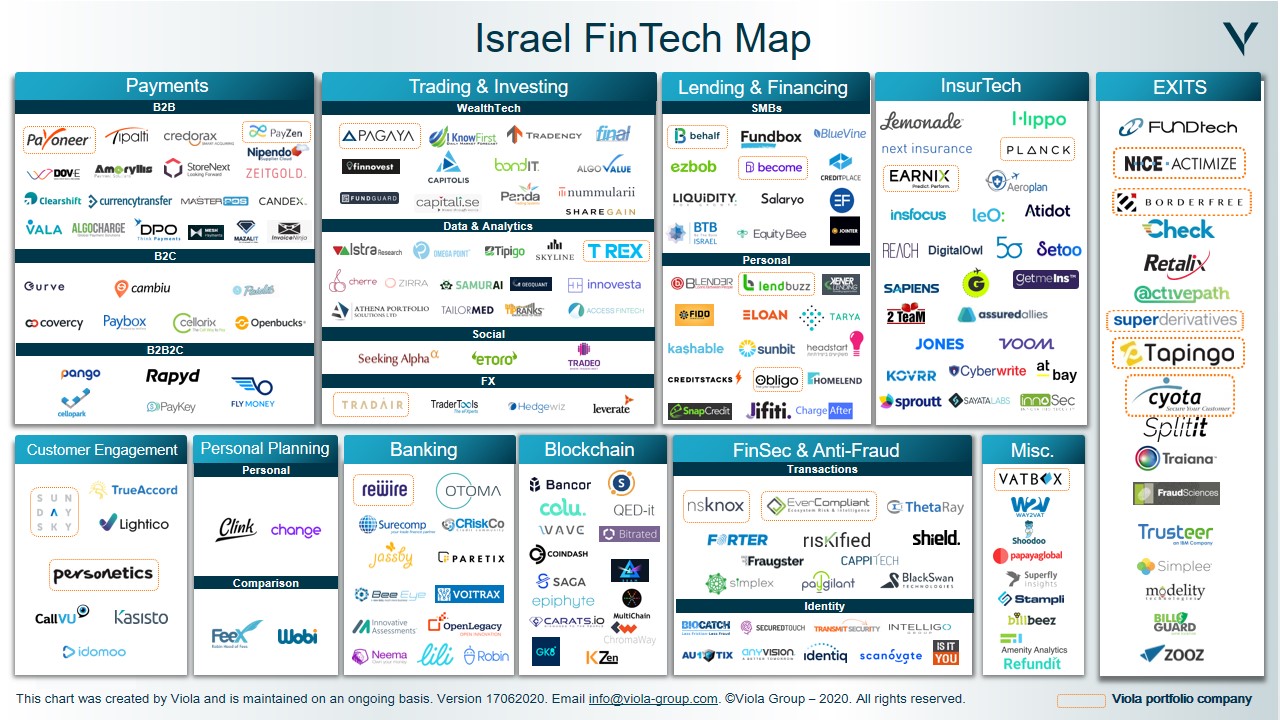 One particular technology that Israel has mastered is artificial intelligence (AI). In the financial sector, application of AI and related technologies is seeing significant traction from investors, who injected US$781 million into 200 AI-focused fintech startups in 2019. The figure represents an 86% increase compared to 2018.

As of 2019, there were more than 780 fintech companies using AI in Israel, the report says. Israeli fintech on a global scale

With a deeply rooted entrepreneurial culture, a large pool of talent and a developed startup ecosystem, Israel is a recognized global leader in innovation and a so-called “Start-Up Nation” with a cycling team that’s even been named Israel Start-Up Nation.

Over the past years, Israel has established itself as a frontrunner in fintech. It was recently ranked the world’s top 12th fintech hub by Findexable, with Tel Aviv being recognized as the leading fintech hub In the Middle East and North Africa (MENA) region, ahead of Dubai, Cairo and Manama.

Despite Israel’s already comfortable position on the global fintech stage, growth is set to accelerate on the back of major developments coming up.

Israel is currently working on a regulatory sandbox that would allow fintech companies to test out innovative products and new business models in a safe environment. The program will be designed to help startups hone their business model and for the government to see how legislation and regulations need to change to adapt to emerging technologies.

In June, the Israel Securities Authority and the Israel Innovation Authority launched a new program focusing on facilitating collaboration between fintech startups, regulators, regulated entities, and companies in the industry.

Called Data Sandbox, the program is run in collaboration with the Tel Aviv Stock Exchange (TASE) with the support of the Israeli Ministry of Finance, and aims to support Israeli companies that meet “the real-world needs of the industry.”

Israel is also expected to welcome its first licensed digital bank next year.