Open banking is making inroads in the Arab world but visions and strategies between countries across the region vary dramatically. Defining a holistic vision for open banking in the region will allow Arab countries to fully reap the fruits of fintech innovation, according to a new report by the MENA Fintech Association.

According to the report, jurisdictions across the Arab world have adopted varied strategies, making the open banking landscape in the region very heterogeneous. In order for open banking to reach its full potential, harmonization across these countries is needed.

For instance, Bahrain has adopted a European-style regulation-driven approach when it comes to open banking, while in the United Arab Emirates (UAE), the Abu Dhabi Global Market (ADGM) and Dubai International Finance Centre (DIFC) have opted for an American-style market-driven approach.

To help establish “a participatory environment” where banks and fintechs in the Arab world can innovate, the report advises the region to adopt an open banking strategy centered on key principles.

For one, regulators should put a key focus on balancing regulatory definitions with market considerations. Rules introduced should accelerate implementation and adoption of open banking while avoiding unnecessary delays due to administrative burdens and compatibility issues, the report says.

In addition to that, the implementation of open banking should be done in phases to ensure that all stakeholders have sufficient time to address local market and technological challenges.

Finally, customer data rights, as well as standards for APIs, data processing and storing, are key issues arising from open banking that regulators must address.

As part of the report, a survey was conducted among Arab central banks and monetary authorities to understand regulators’ views on the emerging trend. 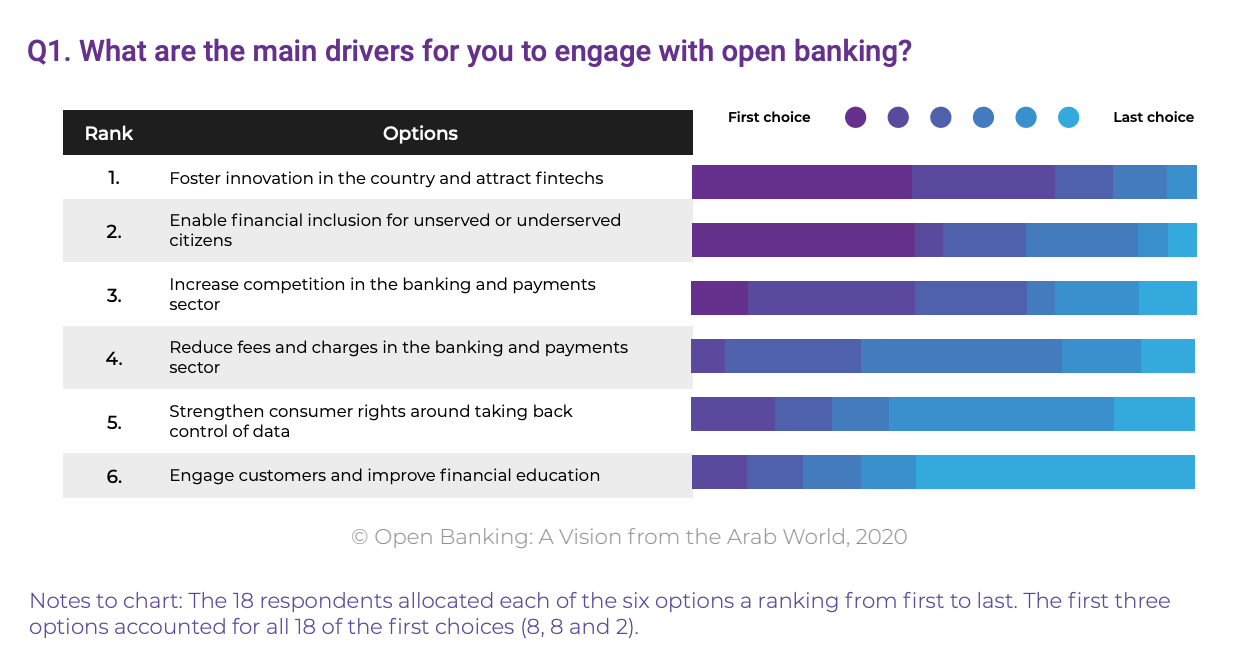 What are the main drivers for you to engage with open banking?, Open Banking: A Vision from the Arab World, MENA Fintech Association, Nov 2020

13 central banks (72%) believe regulators should define binding standards, rules and guidelines in their respective market for open banking, and the same number see regulators as enablers of open banking. 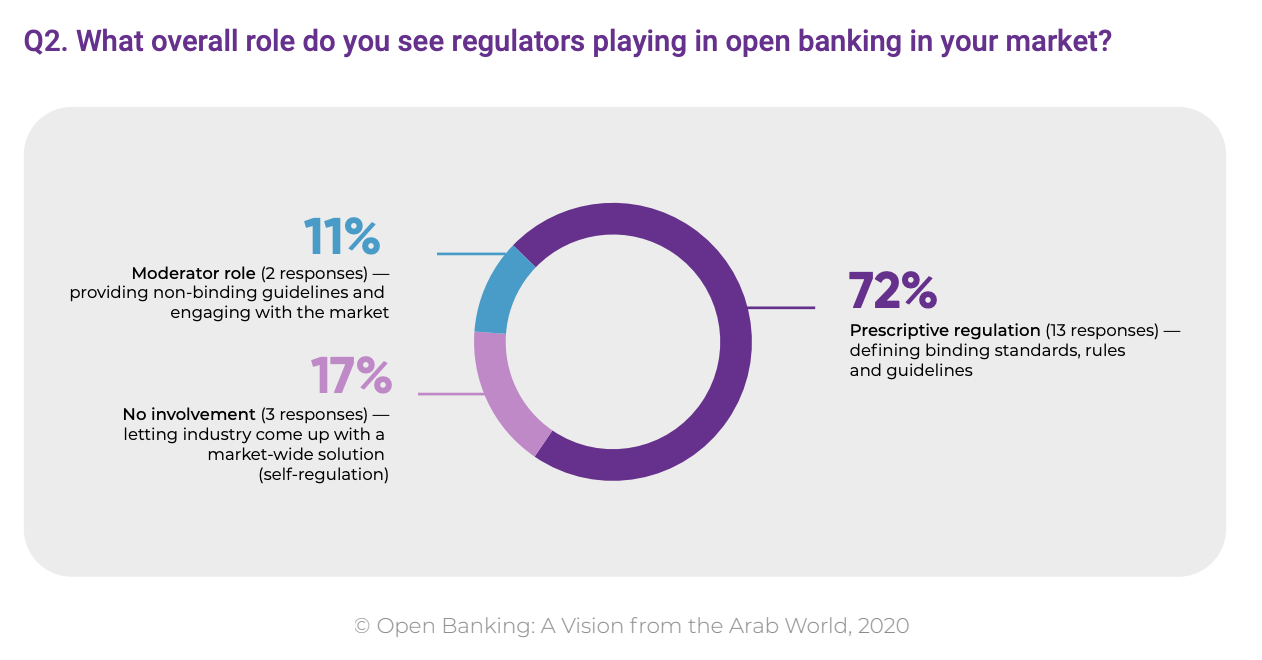 What overall role do you see regulators playing in open banking in your market?, Open Banking: A Vision from the Arab World, MENA Fintech Association, Nov 2020 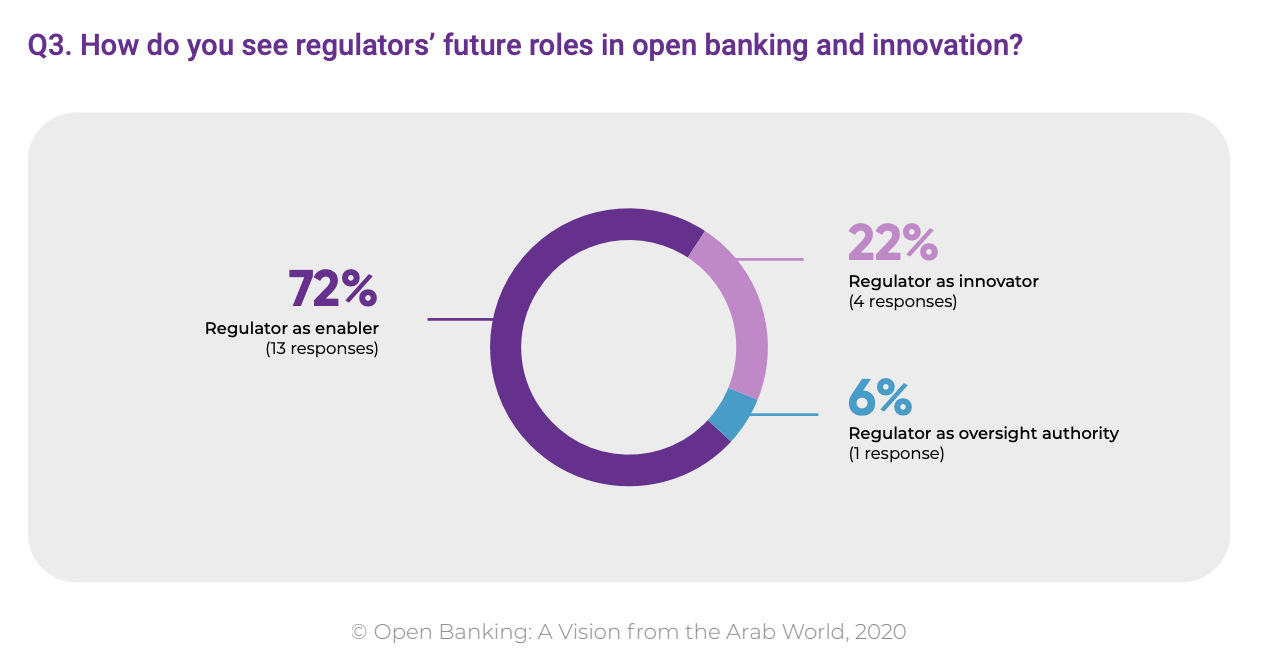 How do you see regulators’ future roles in open banking and innovation?, Open Banking: A Vision from the Arab World, MENA Fintech Association, Nov 2020

In line with the recommendations formulated, survey respondents cited forming industry working groups as the most important success factor for open banking, followed by creating a level playing field with standards for APIs and infrastructure.

What are the most important success factors for a functioning open-banking ecosystem in your market?, Open Banking: A Vision from the Arab World, MENA Fintech Association, Nov 2020

What are the core customer use cases you would like to see enabled by open banking?, Open Banking: A Vision from the Arab World, MENA Fintech Association, Nov 2020

When asked about the potential uses of specific APIs, respondents to the survey put payment and savings accounts and know-your-customer (KYC) verifications at the top of the list. Close behind is credit cards, followed by loans and credit scoring. 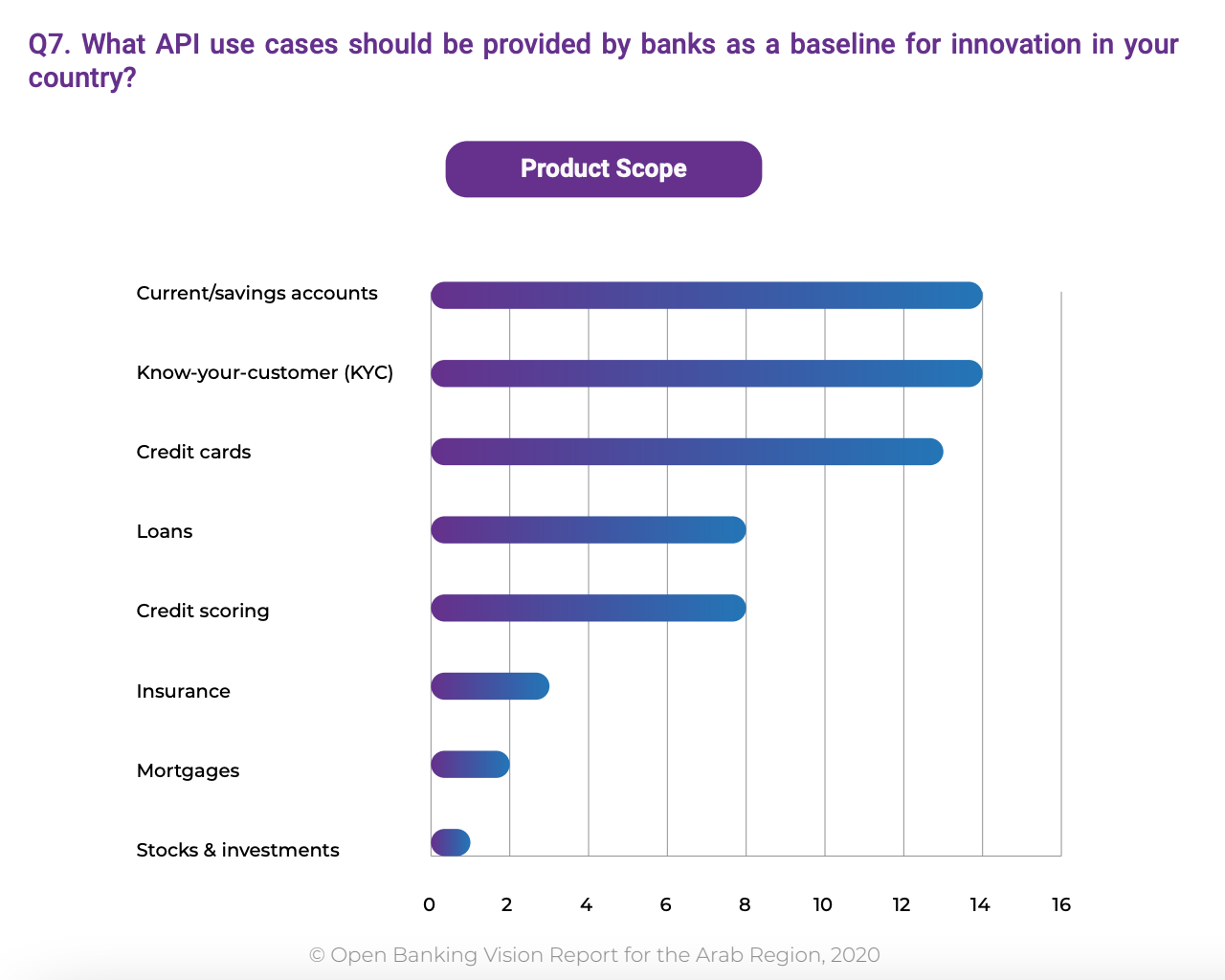 What API use cases should be provided by banks as a baseline for innovation in your country?, Open Banking: A Vision from the Arab World, MENA Fintech Association, Nov 2020

In the Middle East and North Africa (MENA), open banking remains in its infancy with just a handful of startups and so far only one jurisdiction – Bahrain – that has introduced rules for industry-wide adoption.

Bahrain’s commitment towards open banking has allowed the country to welcome the first open banking product in MENA, with the National Bank of Bahrain (NBB) becoming the first financial institution in the region to adopt Tarabut Gateway’s Open Banking infrastructure in December 2019.

Today, Tarabut Gateway is one of MENA’s leaders in open banking. The company has multiple retail banks as its partners in its home country but also in Kuwait, Lebanon, the UK and India. In October 2020, it opened two offices in the UAE and has now plans to enter the Saudi Arabian market.

Other open banking startups have emerged in the UAE and Saudi Arabia as well as.