It has been a blockbuster year so far for Israeli fintech funding, according to the latest from Start-up Nation Central.

It revealed that US$2.3 billion was raised in Israeli fintech funding through venture capital and private equity deals in the first half of the year, in its Fintech H1/2021 Report.

Not only is this three times more than what was raised in the same period last year, but it also beats the 2020 annual total by 30%. Further, Israeli fintech funding in H1 this year also surpassed the 2019 total, which was the previous record year. 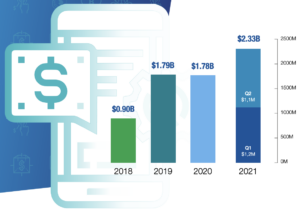 A number of sectors stood out in the Fintech H1/2021 Report, but none more so than payments. The payments sector contributed 35% of the total Israeli fintech funding raised in the first half. In all, Israeli payments startups raised US$812 million across 14 rounds for the period.

Meanwhile, enterprise solutions were also noted as a “growing opportunity for investments in fintech,” according to the report. Solutions in the space of financial planning and analysis, finance and HR were especially highlighted.

Further, both crypto and insurtech received a mention in the report due to growing activity in these sectors. About 120 crypto-related companies are currently located in Israel, and major deals in this space include Fireblocks’ US$133 million Series C, and PayPal’s acquisition of Israeli digital asset security firm Curve.

Insurtech startups also saw some wins, with Next Insurance raising US$250 million in a Series E. Other insurtech startups such as Earnix, Planck and Vestoo all raised funding rounds in the first half.

In terms of exits, H1 2021 saw a total of seven acquisitions, one IPO (Global-e) and one SPAC listing (Payoneer).

And finally, the report noted that Israeli fintech funding saw an increase in both seed and later stage deals. This, the report suggested, showed that while fintech in Israel was at a mature stage, innovation through new startups was still on the rise.