Open banking in the Middle East has become one of the latest buzzwords to come out of the region’s accelerated fintech agenda.

Many countries in the region already had a sturdy traditional banking ecosystem. Now, with a growing incentive to make banking more inclusive and leverage emerging tech opportunities in this space, open banking is gaining increased attention in the Middle East.

With the pace picking for open banking in the Middle East, here are the top 5 trends driving this sector’s growth.

Fintechs such as Tarabut Gateway (Dubai), Lean (Saudi Arabia) and Dapi (Dubai) are early entrants within open banking in the Middle East. These startups have developed APIs that create an interfacing bridge between banks and fintech companies. 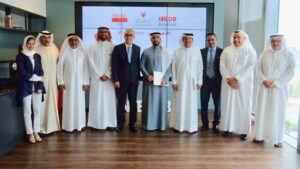 APIs are critical to the success of open banking, as it acts as the inroads through which banking data and payments infrastructure can be accessed for third parties to be able to provide their solutions. Dapi and Lean both offer payments and data APIs, while Tarabut Gateway’s universal API also enables other capabilities, such as account aggregation.

Regulators in Bahrain, UAE and Saudi Arabia have all endorsed an uptake of open banking in the Middle East. Bahrain was the first to do so with its Bahrain Open Banking Framework launched in 2020. The Central Bank of Bahrain also recently approved telecoms company Batelco’s open banking license application.

Elsewhere, Saudi Central Bank Sama has plans to launch open banking in the country by H1 2022, it said in its Open Banking Policy released in January this year. The launch will follow design and market implementation phases to be completed this year.

In the UAE, the Dubai Financial Services Authority (DFSA) began granting open banking licenses in 2020. These are restricted to DIFC companies, who can be licensed as Account Information Service Provider (AISP) or Payment Initiation Service Provider (PISP). The ADGM is also taking steps in this direction. It published a consultation paper last year on regulation for third-party fintech providers as a foundation for open finance.

The payments industry is undergoing a vast transformation in the GCC (admittedly much later than most tech-progressive countries).

Digital transactions in the UAE are mushrooming, with 97% of consumers planning to use at least one new digital payment method within a year. In Bahrain, cashless payments have seen an upswing of 50% year on year in August, on top of the US$3.62 billion that was processed in H1 this year. Saudi Arabia is seeing a decline in the use of cash amidst rising adoption of fintech.

With open banking and paytech being touted as a “match made in heaven,” a strong paytech infrastructure adds further incentive to develop open banking frameworks that can further boost this rapidly growing segment. A McKinsey survey of Middle East payments practitioners found that 80% expected to see open banking prompt a decoupling of savings accounts and payments capabilities.

4. Need for open banking in the Middle East

The tangible impacts of open banking are gaining precedence. 68% of banking and financial professionals in the UAE see open banking as a must-have, with trade finance identified as the predominant segment to be positively impacted by open banking.

SAMA, in its Open Banking Policy, noted that it saw open banking play a “pivotal role in the further development of the Kingdom’s financial sector.”

On a macro level, the growing fintech ecosystem in the Middle East is driving interest in newer fintech innovations. Open banking fits this bill, especially as it entails a transformation of what has largely been a traditional sector with legacy systems.

Fintech funding in the Middle East has been on a rising trend, especially in Saudi Arabia, Egypt and the UAE, as well as Israel.