How the ADGM Uses Regtech to Regulate Virtual Assets: Report

Technology has transformed the financial industry, and regulators need to buy in. That’s the message from the Abu Dhabi Global Market’s (ADGM) latest report on regtech in the emirate.

The report, titled “Powering the Future of Regulation,” noted that the emergence of cloud infrastructure, AI and machine learning, API integrations and data science have completely pivoted the financial industry towards a digital-first model.

Noting that regtech adoption was fairly nascent amongst firms in the ADGM, the report highlighted key measures that the financial jurisdiction has taken to promote the adoption of regtech. One of these was the application of regtech to the regulation of virtual assets in the jurisdiction.

Tech neutrality and inclusiveness was a focal part of the ADGM’s approach to regulating virtual asset service providers, the report said. To this end, the ADGM highlighted its efforts to “facilitate positive regulatory outcomes in the digital asset space” through regtech measures.

Regtech for virtual assets at the ADGM 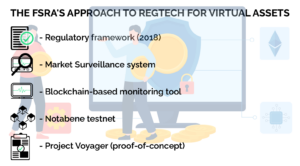 The FSRA has introduced a Market Surveillance System which monitors trading activity for market manipulation or insider dealing, using real time feeds of all order and trade data for each trading venue at the ADGM. Virtual asset trading is also monitored by this system. It can perform cross market surveillance for instruments traded at more than one venue, providing useful applications for popular virtual asset trading pairs such as Bitcoin-USD or Litecoin-USD.

The FSRA is also looking to build a monitoring tool to track system behaviour at firms to flag downtime or unwarranted latency. The tool will involve transaction monitoring using blockchain analytics tools.

The Notabene testnet allows ADGM-located companies to test compliance through simulated transactions with companies in other jurisdictions. A cross-border testnet between the ADGM and Singapore took place in August this year.

The FSRA is also working with blockchain-based financial markets infrastructure company Securrency to develop a proof-of-concept for Project Voyager, aiming to automate compliance with the travel rule.

The ADGM’s approach to regtech 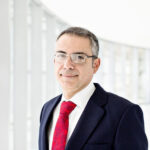 “When dealing with such rapid transformation, regulators across the globe can no longer rely on “analogue” information collected periodically through static forms, ex-post reporting and hard-to-scale processes and systems, in order to effectively carry out their functions.

Alongside the impact of fintech, the potential for [regtech] solutions to transform the regulator has also had a positive impact on the relationship between regulators and the industry,”

Givanakis continued to explain how regulators largely took a “watch and learn approach” during the earlier innings of the fintech industry. Their role has now evolved to support-related functions through regulatory sandboxes, tech-sprints and innovation challenges to bring about improved consumer and risk management outcomes, he said.

Regulators are now faced with a second turning point, where they need to transform their own processes for the digital age.

“Regulators must adopt and consume regtech solutions that augment their own capabilities to become more proactive in detecting and mitigating new risks brought about by untapped opportunities in a globally connected digital financial system,”