Fintech Continues to Gain Momentum in the Middle East and Turkey

In the Middle East and Turkey, young and tech-savvy consumers are driving demand for fintech products and services. Mastercard researches show that not only usage of fintech solutions is raising in the region, but digital tools are also becoming a prerequisite in consumers’ eyes, a new report by the credit card network points out. 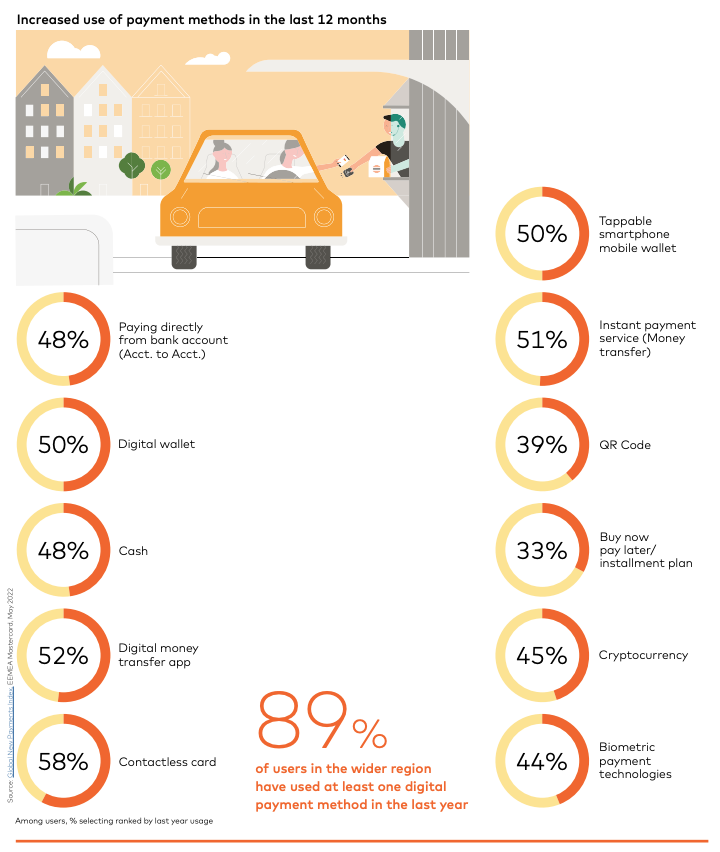 Use of emerging payment methods in the Middle East, Source: Mastercard 2022

Going further, the study also found that 61% of MENA consumers would avoid businesses that do not accept electronic payments of any kind, indicating drastic consumer preference changes and behaviors.

But digital payments is just one fintech segment that MENA consumers have grown to love. Open banking is another area that’s witnessed rising awareness and adoption. In fact, 76% of respondents indicated knowing at least a little about open banking, and 74% shared that they would like to be able to make purchases and pay bills direct from their bank account to merchants/utility providers without inputting card details or writing a cheque. 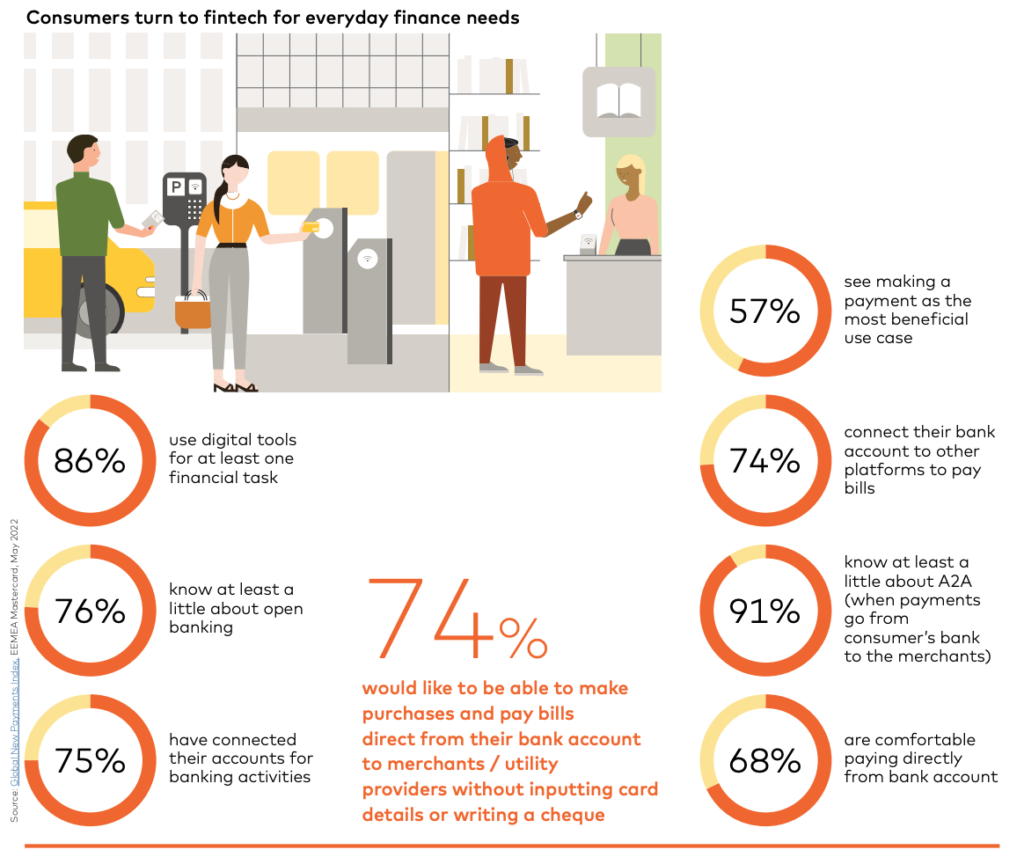 Buoyed by demand, the fintech sector in the Middle East and Turkey has risen strongly over the past years, recording a compounded annual growth rate (CAGR) is 30%, according to Mastercard.

This has prompted investors to pour in millions of dollars in venture capital (VC) investments to help support whom they believe will be the region’s next fintech superstars.

In 2021, fintech companies in the Middle East and Turkey raised a record of US$504 million, up nearly threefold from 2020’s US$169 million, data show.

UAE fintech companies made up much of that amount, securing a total of US$220.8 million. 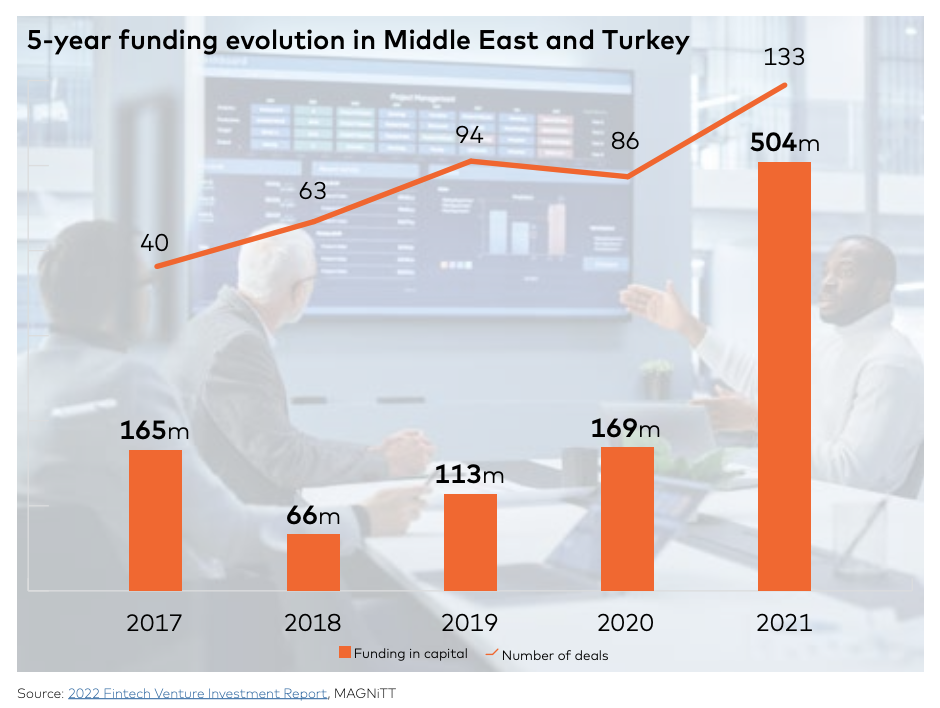 This year, the UAE continues to maintain its position as a prominent fintech hub in the region, a leading position it has secured thanks to the government’s commitment to supporting innovation, the launch of strategies like the UAE Vision 2021 National Agenda, as well as favorable regulation changes that have lured innovative fintech companies into setting up shop domestically.

Saudi Arabia is another important fintech hub in the Middle East and Turkey that has established over the years a conducive regulatory environment for fintech companies to thrive. Notable initiatives include the licensing of three digital banks, the launch of fintech sandboxes under the Saudi Arabian Monetary Authority (SAMA) and the Capital Markets Authority (CMA), as well as the issuance of the Open Banking Policy last year, a framework that formulates how open banking will be implemented in the country and which mandates banks to adopt API policies.

Like the UAE and Saudi Arabia, Egypt has enabled fintech innovation by introducing regulations in promising segments like robo-advisory, nano-finance and insurtech, as well as by launching supportive initiatives like the Regulatory Sandbox.

Turkey, meanwhile, has seen the rise of a booming fintech industry where two in ten startups are now operating in the field. This industry has been supported by the thriving investor landscape where the proportion of local investors in fintech startups (65%) stands higher than all other emerging venture markets, the Mastercard report says.

In the Middle East and Turkey, almost half of the 400 million people in the region are under the age of 25. These consumers are extremely tech savvy and are eagerly embracing digital tools, the report notes. Moving forward, these forces, coupled with ongoing pushes from governments to foster innovation, will only continue to drive fintech adoption and growth across the region.

This year, Mastercard forecasts that 465+ fintech companies from sub-segments including payments, open banking, regtech and compliance, smart lending, insurtech, blockchain, and cybersecurity, will raise over US$2 billion in venture capital (VC) funding, or nearly four times more than the total sum secured in 2021. By 2030, the Middle East and North Africa (MENA) region is projected to have 45 unicorns.