2022, a Breakout Year for Open Banking in Saudi Arabia

In Saudi Arabia, open banking is taking off, driven by a conducive regulatory landscape, increased competition in the financial sector, and rising investors’ interest.

According to the report, 2022 will be a breakout year for open banking, building on a series of developments observed over the past year. 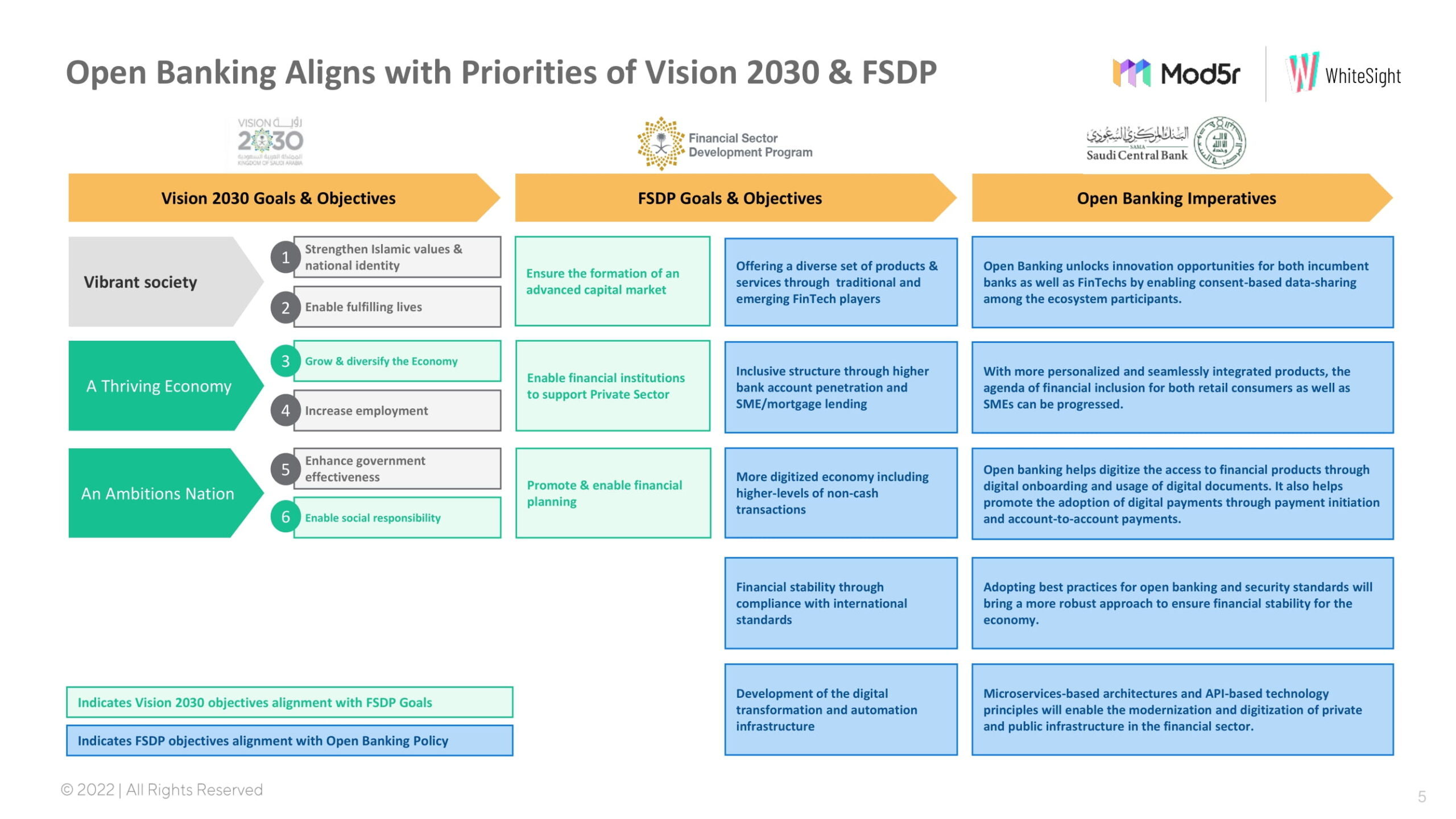 Open Banking in Saudi Arabia: The Dawn of Collaborative and Scalable Innovation

In 2021, the Saudi Arabian Central Bank (SAMA) launched a framework for open banking that sets out the regulator’s ambitions and a timeline for development, implementation and go-live of open banking in the country. The central bank is currently in the process of rolling out open banking.

In addition to the open banking framework, SAMA also launched the first version of the Open Data Platform last year, a platform that offers economic, financial and monetary statistics and indicators for Saudi Arabia. An application programming interface (API) will be added to the platform later on, allowing users to request data.

SAMA’s recent open banking moves fall under the government’s broader Vision 2030, a strategic framework to reduce Saudi Arabia’s dependence on oil, diversify its economy, and develop public service sectors. The framework includes the Financial Sector Development Program, which seeks, among other things, to increase support in the field of fintech for startups, move towards a cashless society, and launch an instant payment system. It aims to make 70% of transactions non-cash by 2030.

In the startup ecosystem, Saudi Arabia’s progressive approach to open banking has seen early entrants like Lean Technologies generate significant investors’ interest. In January, Sequoia Capital India made its first investment in the Middle East, leading a US$33 million funding round for the startup.

Founded in 2019, Lean Technologies enables companies to access bank data and make payments. Since launching its flagship data and payments APIs in February 2021, the company says it has amassed dozens of the country’s financial players as clients and processed hundreds of millions of dollars in transactions.

Lean Technologies has offices in Riyadh, Abu Dhabi, Dubai, Cairo and London, and says it “aims to be the first Saudi aggregators.”

In the traditional banking sector, incumbents are waking up to the trend as well. SABB, an associated company of the HSBC Group based in Saudi Arabia, is developing its own open banking platform to partner and co-develop with fintechs, said Saeed A. Assiri, Head of Digital Strategy and Innovation, SABB, as quoted in the WhiteSight/Mod5r report.

Similarly, Fernando Plaza, Chief Digital Officer, Arab National Bank (ANB), said the financial institution will be expanding its service offering and collaborate with fintech companies and third parties as it strives to become a market leader in open banking.

Saudi Arabia is one of the two jurisdictions in the Middle East to have adopted an open banking framework to require, facilitate or allow banks to share customer permissioned data with third parties.

It followed the lead of Bahrain, a regional pioneer in open banking regulation which started its open banking journey back in 2018. In 2020, the Central Bank of Bahrain (CBB) issued the Bahrain Open Banking framework, setting out a timeline for implementation across the financial services ecosystem.

Bahrain’s early involvement in open banking has allowed it to become a regional leader in the movement. Homegrown Tarabut Gateway, a company founded in 2018, is today the largest regulated open banking platform in the Middle East and North Africa (MENA), connecting a regional network of banks and fintechs.

The startup has raised US$25 million in funding, making it one of the most well-funded startups in MENA, and has inked partnerships with prominent stakeholders, including Riyad Bank which will see the two organizations working together to develop an open innovation platform in Saudi Arabia.