Israeli venture investing platform OurCrowd has signed an MoU with the Azerbaijan Investment Company (AIC) to bolster strategic investments by the Government of Azerbaijan in OurCrowd’s portfolio.

The agreement is the first of its kind since Azerbaijan opened its Trade and Tourism Offices in Israel. It makes OurCrowd the first Israeli business to collaborate with the Azerbaijani government since the offices were set up, a statement said.

OurCrowd is an equity crowdfunding platform providing access to startup and venture fund investments in Israel. The company currently has 118,000 global investors, including funds, multinational companies, and private investors.

Under the agreement, AIC is looking to invest in 10-15 startups from the OurCrowd portfolio. It will especially focus on tech and innovation companies, especially those in the energy, health, agtech, foodtech, and education space.

Both companies are also looking to enable portfolio startups to establish a presence in Azerbaijan. OurCrowd also expects other private and public sector partners from Azerbaijan to make additional investments in the future. 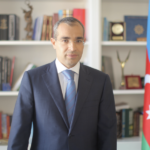 Chairman of AIC’s Supervisory Board, and Minister of Economy of Azerbaijan, Mikayil Jabbarov

“The MoU between the Israeli company OurCrowd, and the Azerbaijan Investment Company has been signed to attract investments in startup projects and transfer the best practices of leading Israeli companies to our country.

This new area of cooperation will contribute to the establishment of an innovative ecosystem in our country,”

Chairman of AIC’s Supervisory Board, and Minister of Economy of Azerbaijan, Mikayil Jabbarov said.

The MoU is a step forward in the normalization of ties between regional countries and Israel. These partnerships are emerging elsewhere in the Middle East too, such as in the UAE and Bahrain.

At the same time, it is the latest in a number of MoUs that the AIC has been signing  with partners this year. It recently signed separate MoUs with Baku International Sea Trade Port and JTA International Holding of Qatar to develop “joint activities.”

Locally, it has also entered into five-year MoUs with the Azerbaijan Turkey Business Association, the Businessmen and Industrialists of Turkey and Azerbaijan, and MUSIAD-Azerbaijan to develop “possible plans for joint actions and approaches.”

Ultimately, the AIC aims to make short-term investments into Azerbaijan’s commercial sector, expand its non-oil revenues, and bring further investment into the country.