The Ultimate Snapshot of Fintech in 10 Arab Countries

The Arab Monetary Fund (AMF) recently released the second edition of The Arab Region Fintech Guide. The report discussed the current state of fintech in Arab countries. It features contributions from various central banks in the Arabian peninsula, as members of the Arab Regional Fintech Working Group.

The second edition of the report covers a total of ten Arab countries, versus an initial four – UAE, Bahrain, Saudi Arabia, and Egypt – in the previous version. It gives an expansive overview of  fintech in Arab countries. This includes current fintech activities, regulatory bodies, and key developments to promote fintech in these countries.

Here’s a snapshot of the most salient points reported by the Arab Regional Fintech Working Group in the AMF’s latest report.

Jordan has a largely young demographic and also has a somewhat high internet penetration, the report said. Internet penetration in Jordan was 66.8% in 2019, according to data from the World Bank. At the same time, however, the report noted that 38% of adults did not have access to formal financial services, while 24.8 % of adults were excluded from both formal and informal sources.

When it comes to fintech in Jordan, the Central Bank of Jordan (CBJ) said that it would “like to open dialogue channels” as a consultative approach to understanding how it can support fintech entrepreneurship in the country. 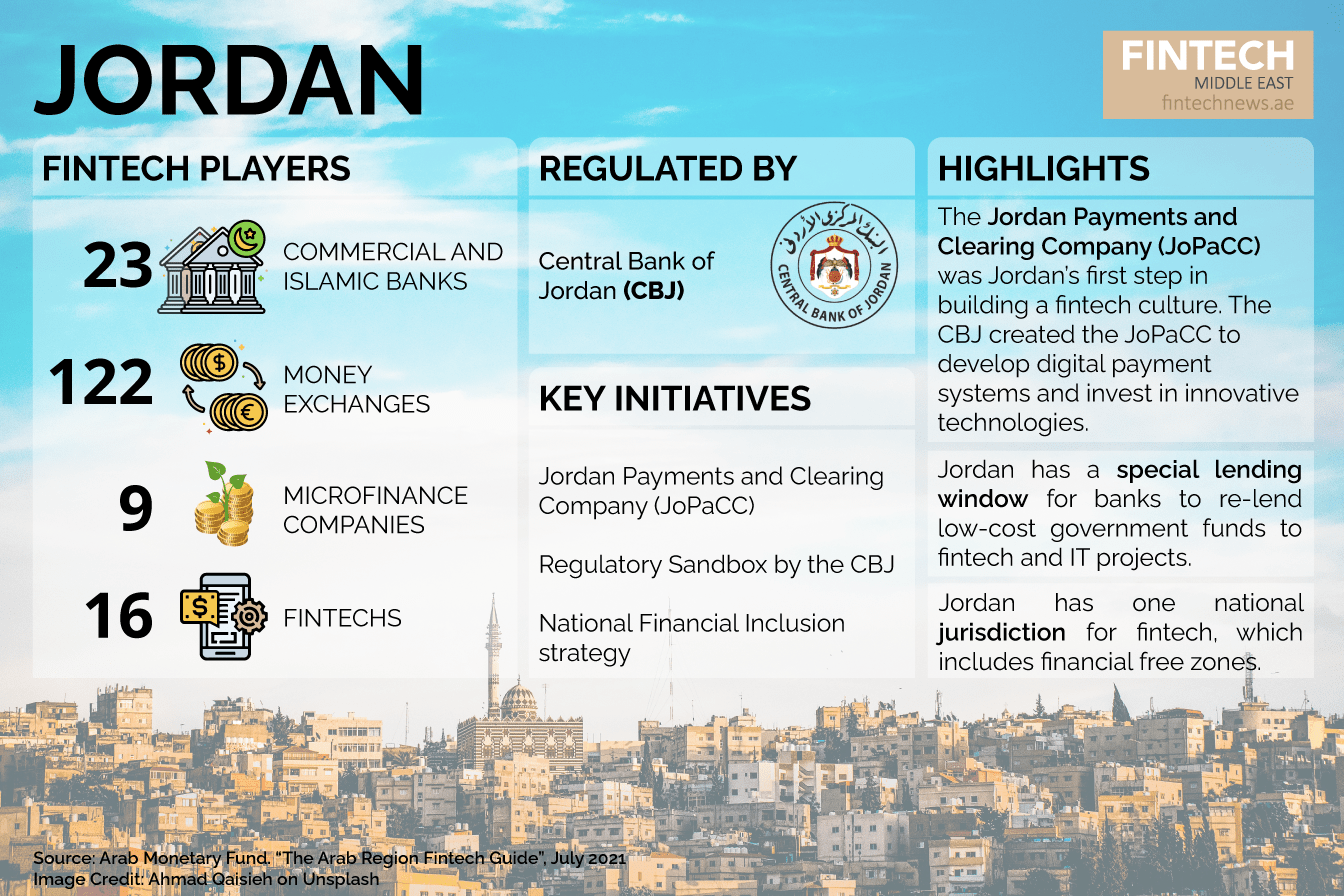 A regional hub for fintech in Arab countries, the UAE was the first to lay the foundations for a fintech ecosystem in the region, the report said. It aims to become one of the top five fintech hubs across the world by December 2023. The report stated that the UAE had over 400 fintech companies as of early 2021.

Further, as part of the country’s fintech vision, regulatory authorities have introduced a number of programs, the report said. These included a Central Bank Digital Currency project, digital KYC and payment infrastructures development, trade finance platform and digitisation, and adoption of blockchain. 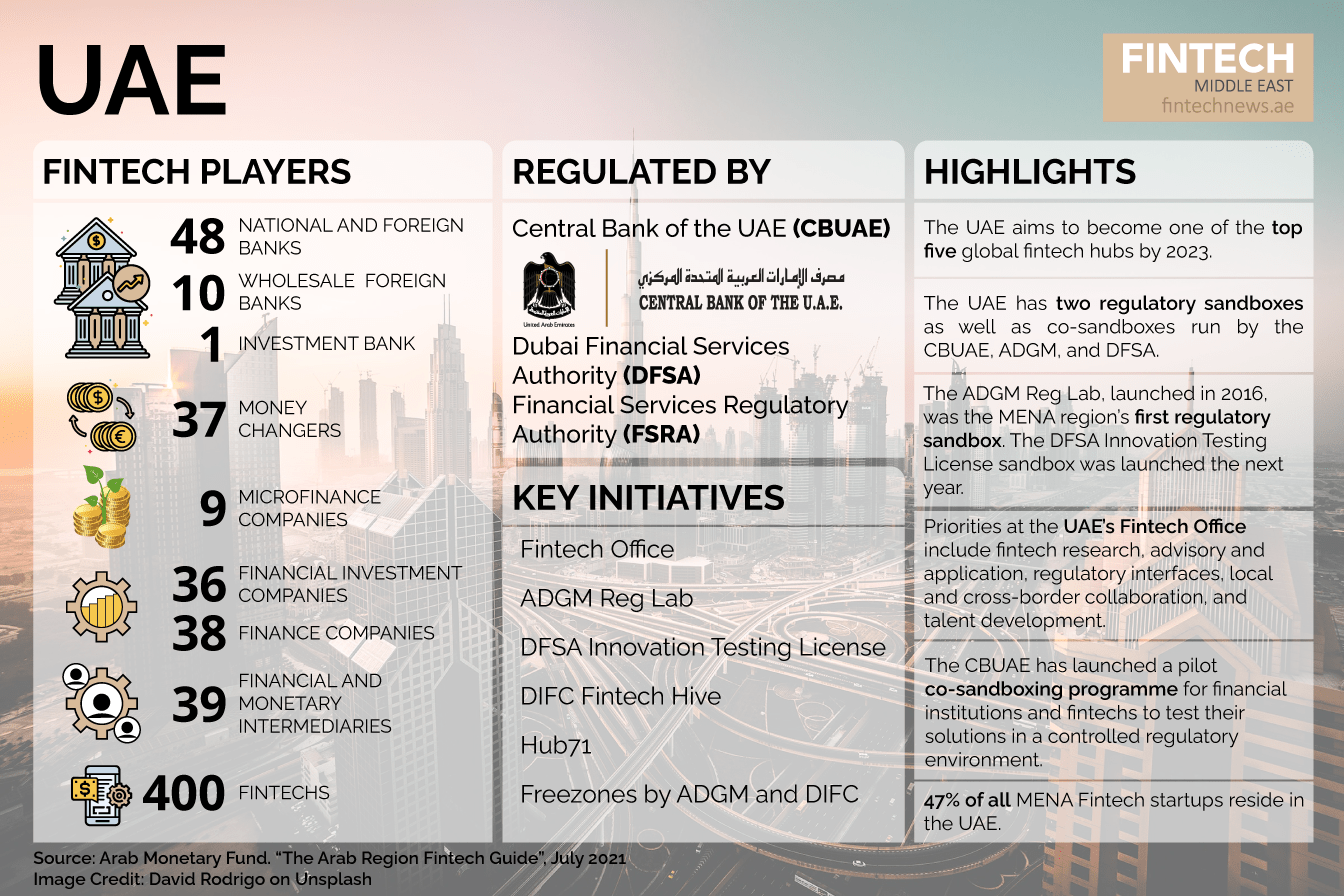 Amidst changing customer behaviour and technological advancements, fintech has become a top priority for Bahrain, the report said. It highlighted Bahrain as the first MENA-based country to mandate compliance for its Open Banking regulations across retail banks.

Solutions being tested in Bahrain’s Regulatory Sandbox include loan automation platforms, open banking, robo-advisory, mobile micro finance, challenger banks, card processing, remittance, and insurtech. However, crypto services is the largest category of solutions to be tested at the sandbox. 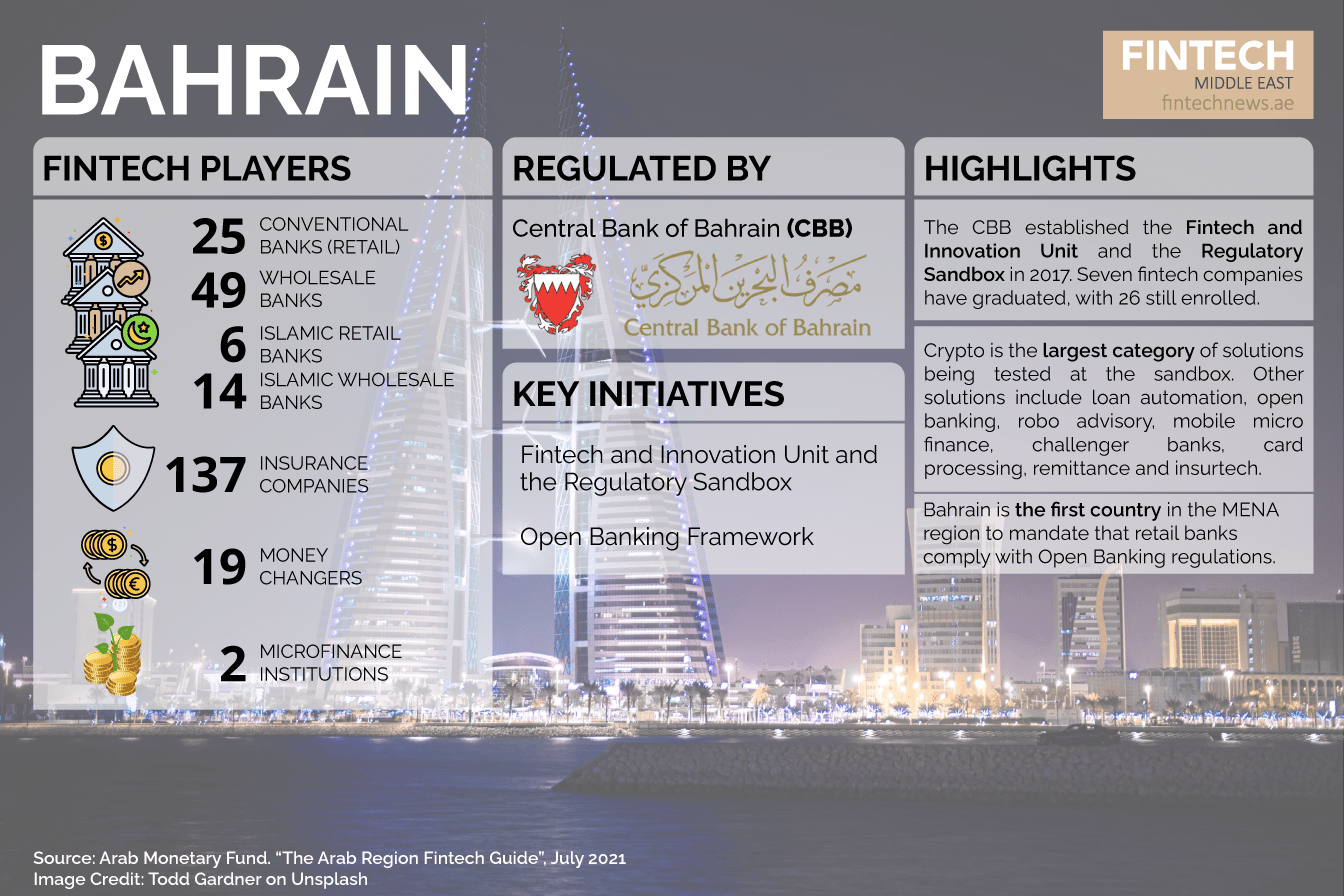 Fintech is one of the many sectors that Saudi Arabia is leveraging as part of its Vision 2030 agenda. The country aims to diversify its economy away from oil, while generating job opportunities. Its National Fintech Strategy is in the final stage of government approval, and includes 25 programs of work to support the fintech sector in the country.

Of the 155 fintechs registered with the country’s fintech hub Fintech Saudi, 29 come under Saudi Central Bank SAMA’s jurisdiction, while 16 fall under its Capital Market Authority (CMA). The fintech sector is driven by young, first gen entrepreneurs, the report said. 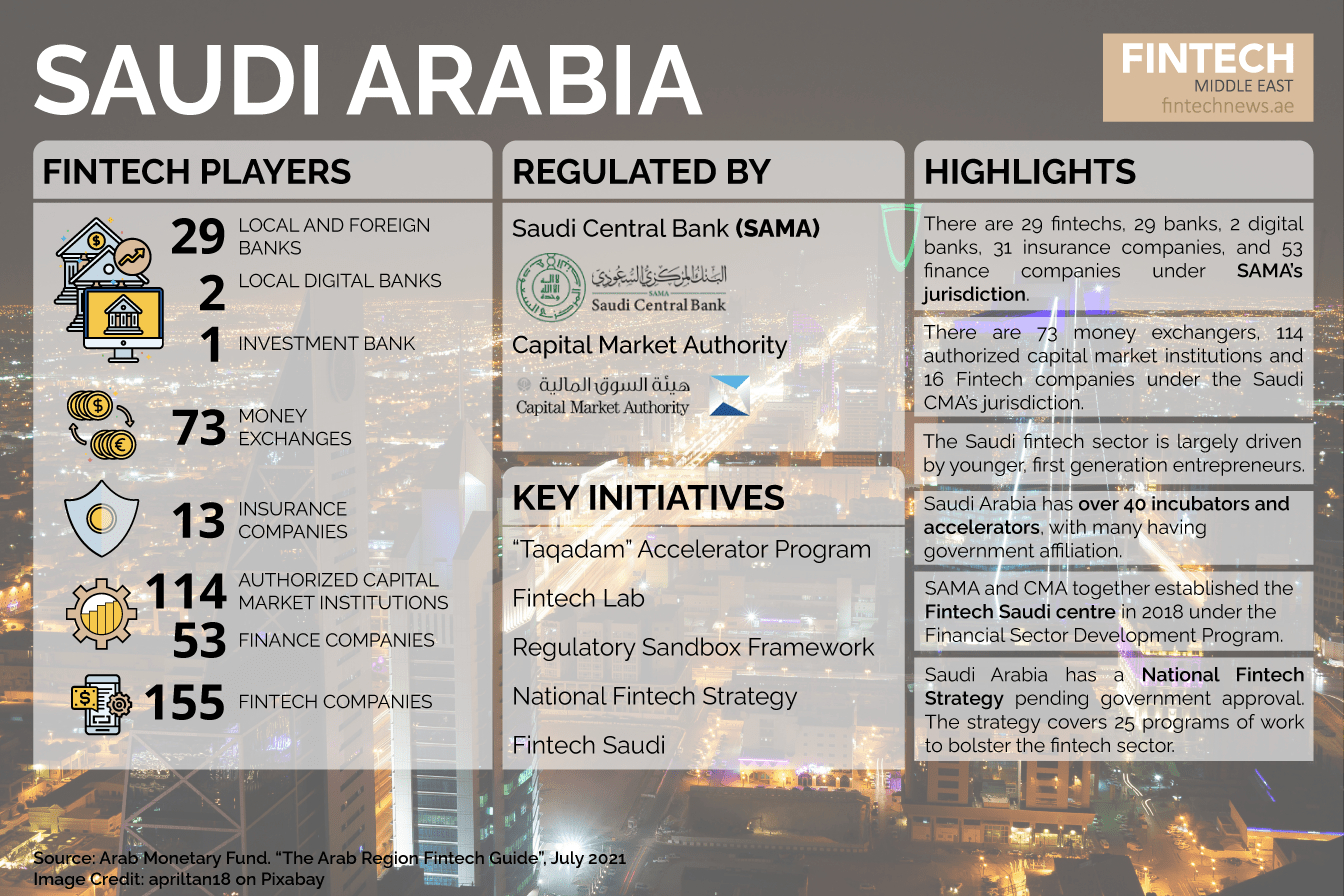 Political challenges in Sudan over the past two decades have severely hurt its startup ecosystem, rendering it “virtually non-existent,” the report said. A largely cash-based society, Sudan made moves towards cashless solutions after the onset of the COVID-19 pandemic.

Further, the report added that the Central Bank of Sudan (CBS) was looking to its banking industry, and promote the use of financial technologies, as a means to achieve financial inclusion. 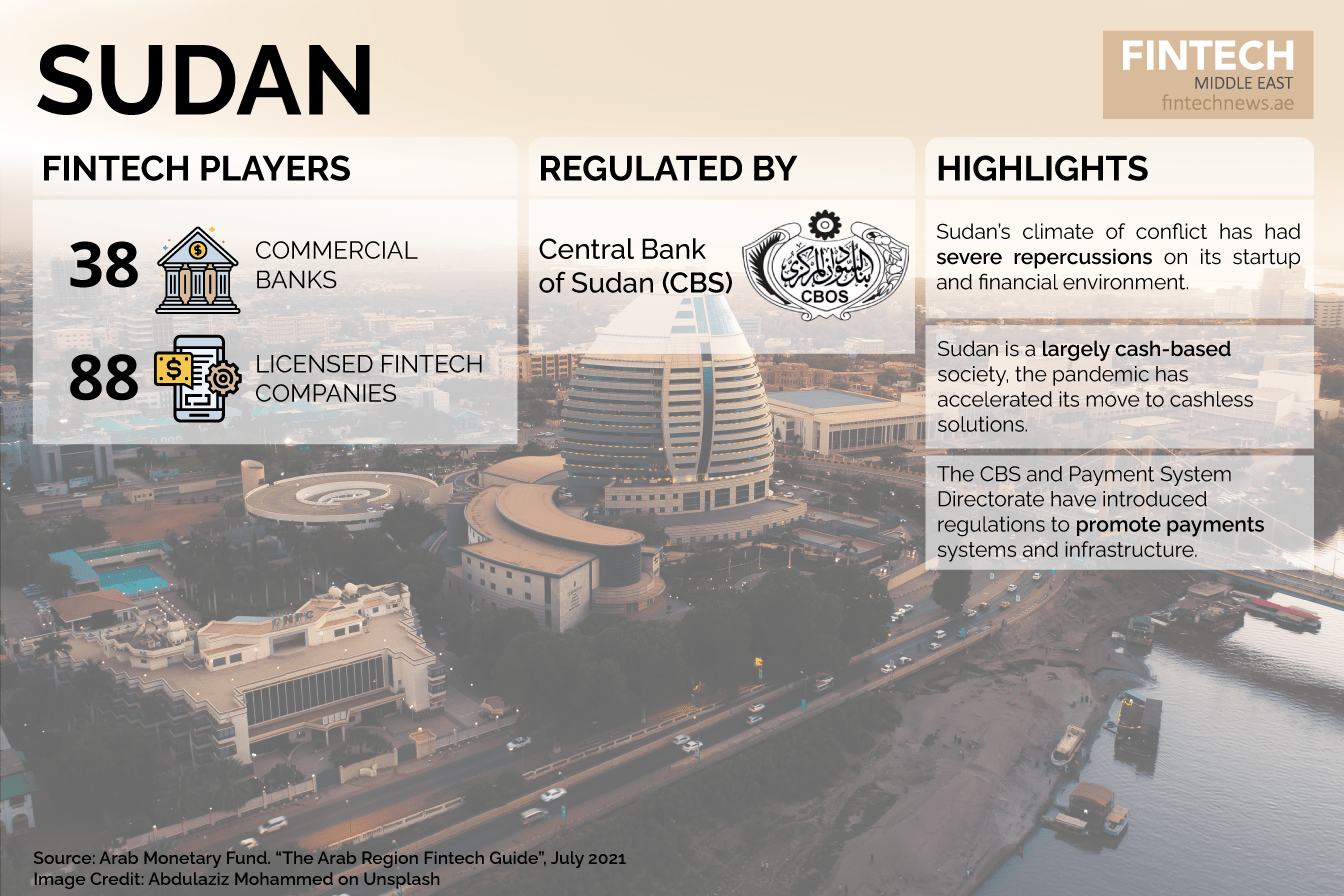 Another conflict zone, the report noted that the Iraqi banking sector has faced challenges due to conflicts from the early 2000s. However, despite a comparatively limited demand for digital financial services in Iraq, interest in mobile and electronic payment services have been increasing.

The Central Bank of Iraq (CBI) has a long-term vision to include digital ID and e-KYC solutions, big data and business intelligence, a sandbox and innovation hub, digital currency, a cyber threat intelligence platform, and an open banking framework, in its fintech space. 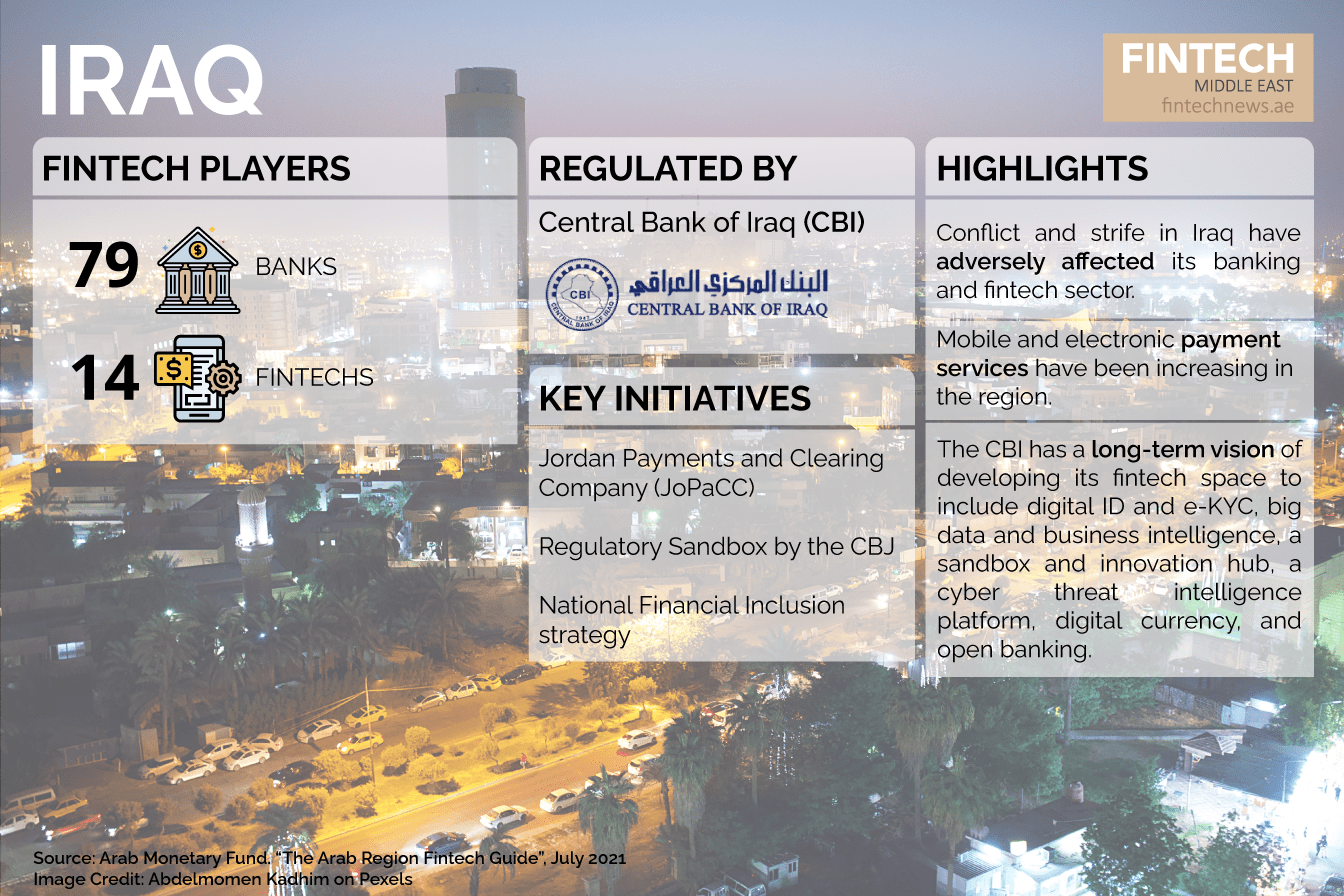 Oman is looking to support its fintech startups, SMEs, banks, and technology firms as a means to boost the county’s economic growth, create new jobs, and attract venture investments. It as simplifying regulation for fintech and payment services, and introduced a number of ventures to support their growth, the report said.

The country’s fintech ecosystem will focus on adopting fintech laws and regulations, developing talent and skills in this space, and supporting education and academia, and the fintech sector, the report added. 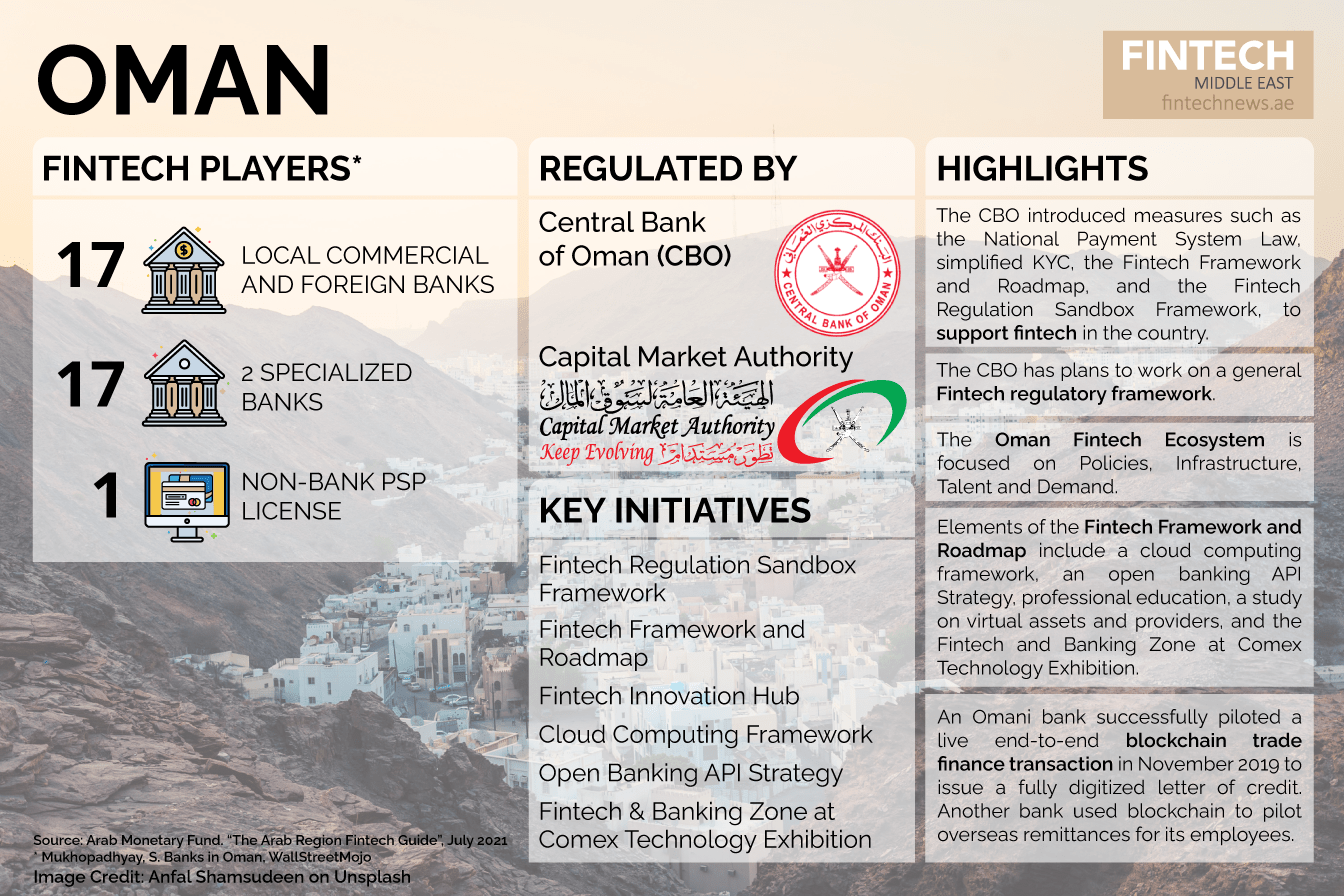 Kuwait’s government continues to develop the infrastructure to enhance its fintech ecosystem, according to the report. This includes setting up a National Fund for Small and Medium Enterprise Development to support SMEs, including fintech companies, financially.

Aiming to promote fintech adoption, the Central Bank of Kuwait (CBK) has established a dedicated Fintech Unit within the bank, as well as a Regulatory Sandbox Framework in 2018. 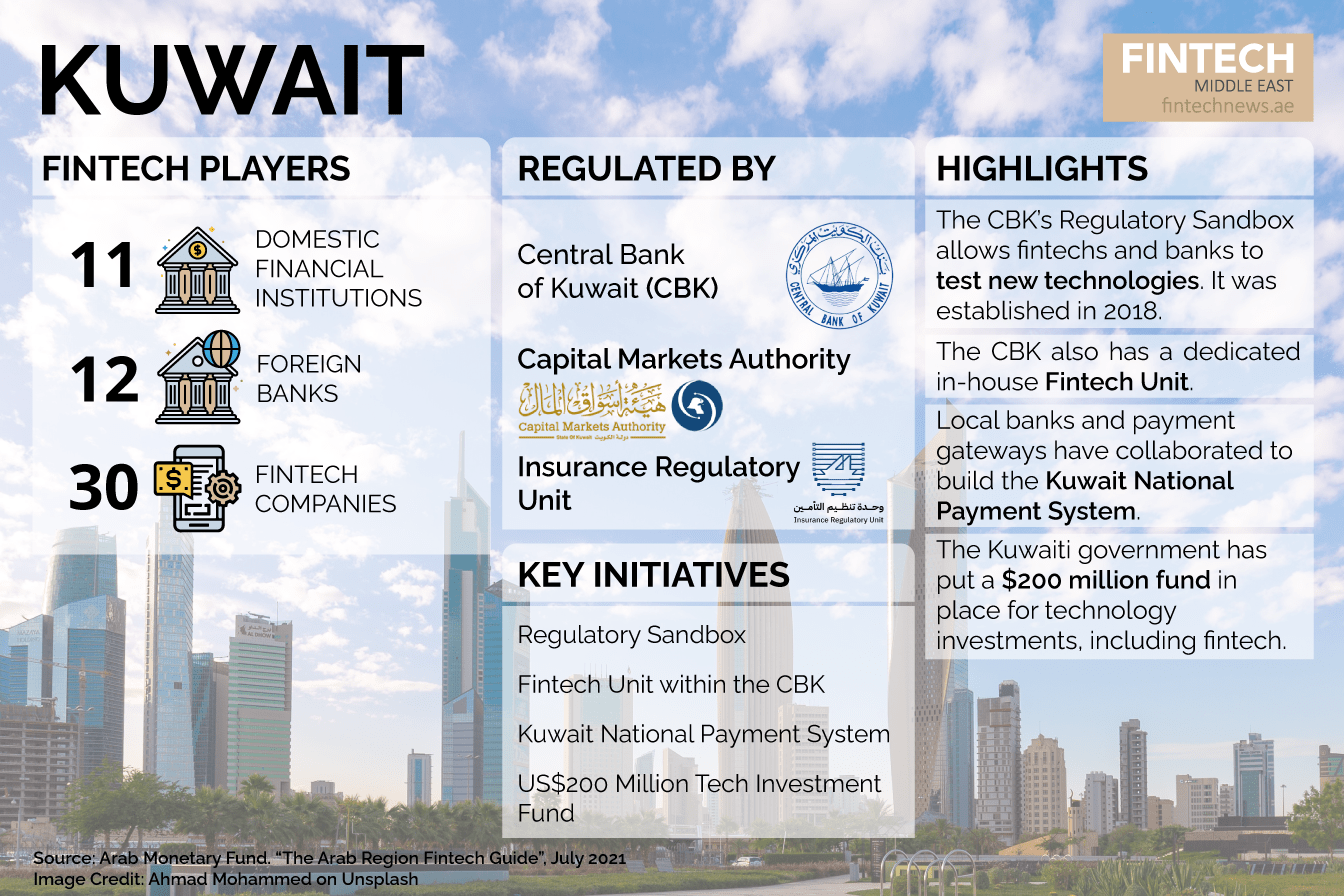 The fintech industry in Lebanon benefits from emerging interest in payments, insurance and lending, and high digital literacy, leading to an increasing demand for digital financial services, the report said.

Further, the Banque du Liban (BDL) oversees the development of the money and financial markets, as well as payment systems and instruments in Lebanon. However, an ongoing economic crisis has crippled the country, and poses a considerable challenge to its financial and tech sectors. 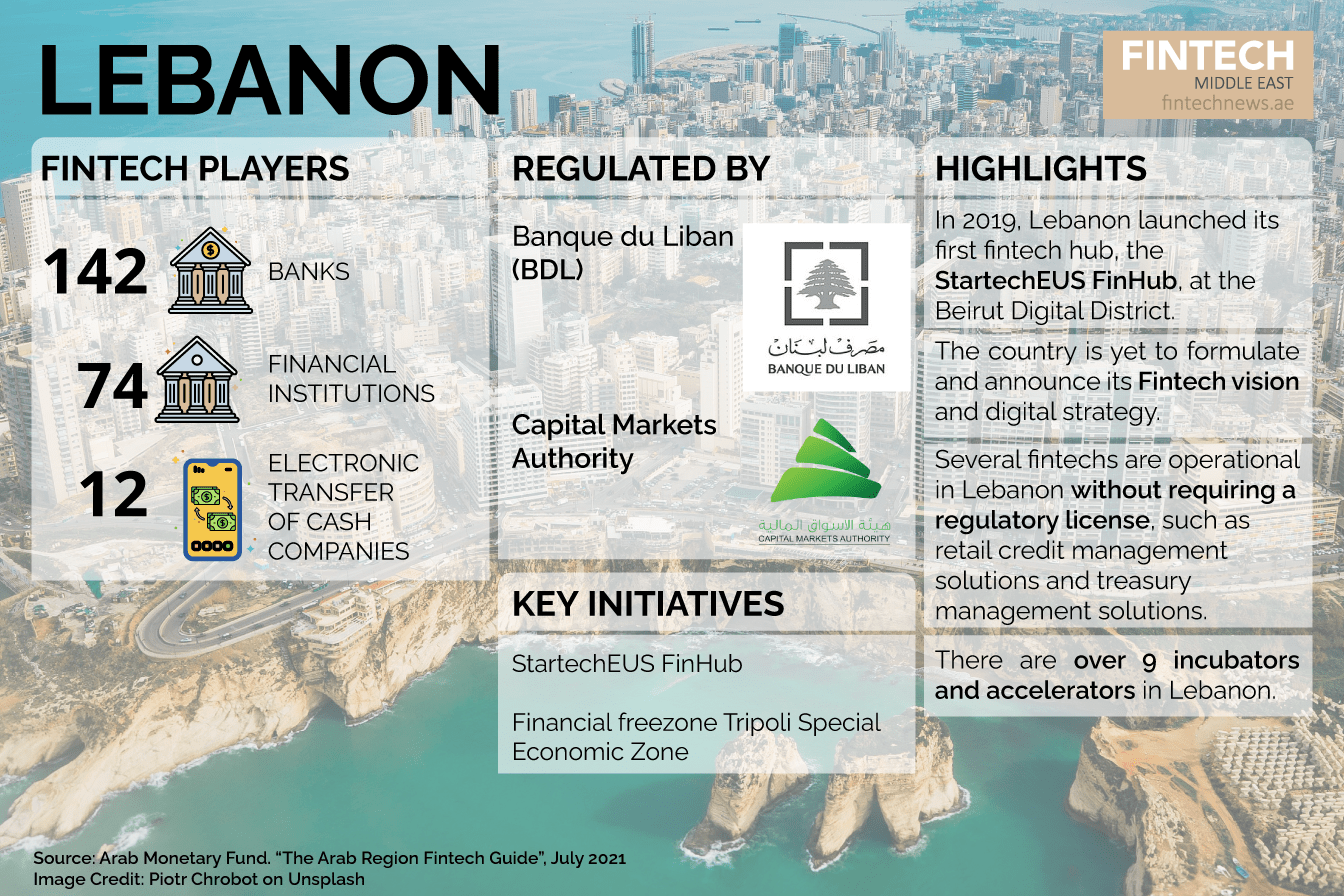 The Central Bank of Egypt is keen to promote financial inclusion and fintech in the country through initiatives such as a “Financial Inclusion Unit,” mobile payment services regulations, increased SME lending and a National Council for Payments.

Egypt was also chosen under the World Bank’s Financial Inclusion Global Initiative in 2017. The initiative is aimed at increasing accessibility to financial services for Egypt’s unbanked and underbanked population, and preparing policy recommendations in digital finance. 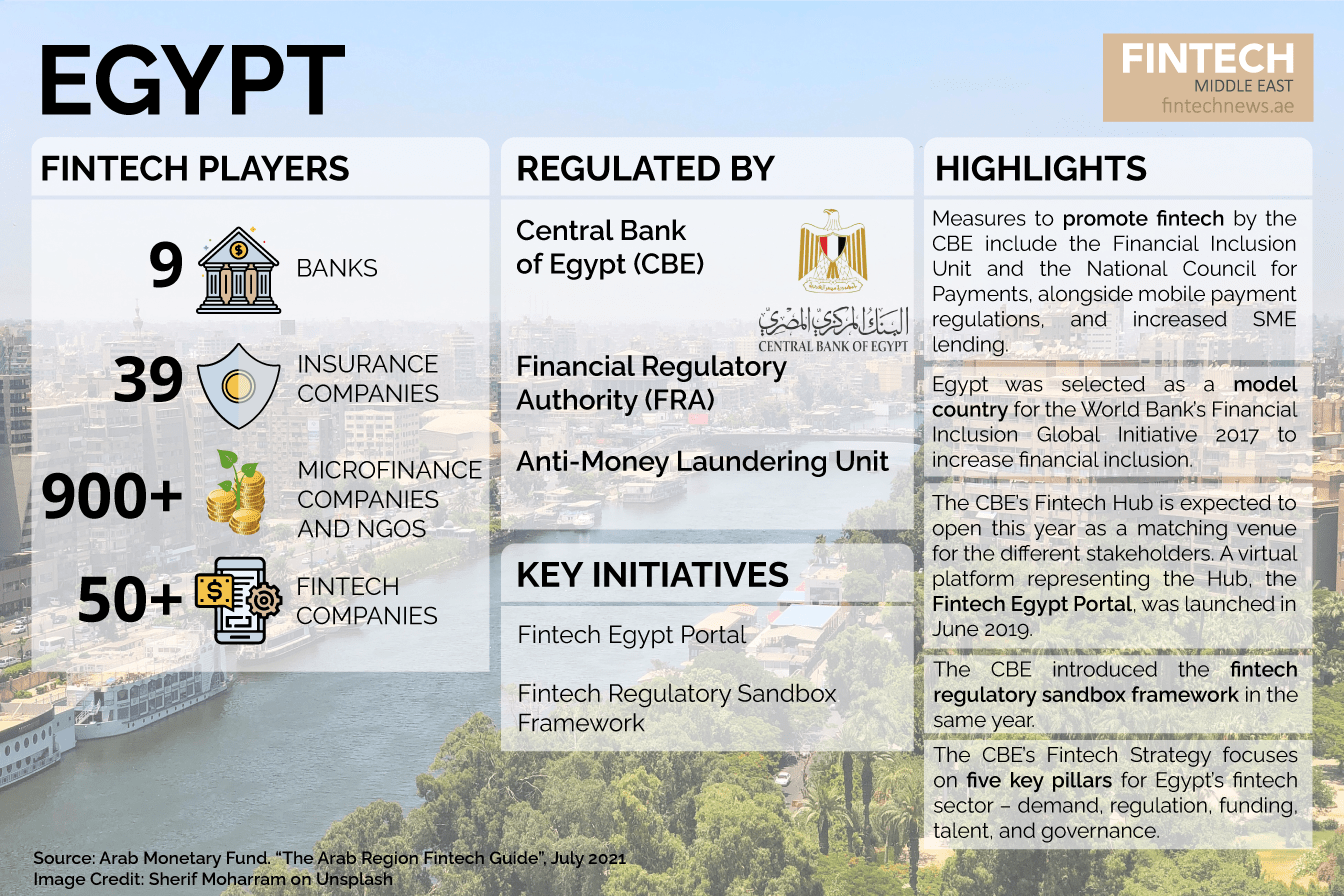